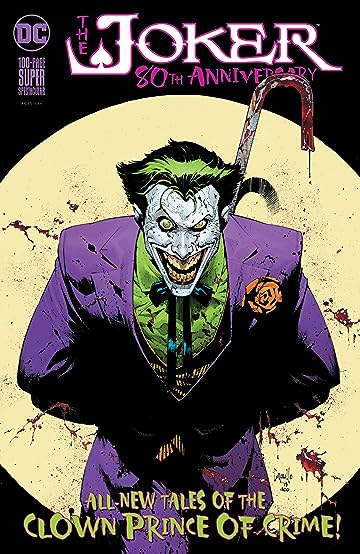 It is hard to believe, but it is so true. The Joker has been terrorizing Batman for over eighty years. Ever since his first appearance in the premier of Batman’s first solo comic book, he has plagued Gotham City and has caused much debate within the Dark Knight’s fanbase. To celebrate his anniversary, DC Comics released “The Joker: 80th Anniversary,” an anthology of horror stories from various writers and artists. Since there are so many stories, I will highlight my favorite and least favorite.

My favorite is “Scars” written by Scott Snyder with artwork from Jock tells the story of a psychiatrist trying to help a “Joker survivor” whose face has been turned into a permanent grin. It all leads to a shocking conclusion with the brilliant artwork perfectly capturing the terrifying nature of the Joker.

My least favorite is “The War Within” by Peter J. Tomasi. Normally, I enjoy Tomasi’s work a great deal, but I honestly did not understand the point of the story or honestly what it had to do with the Joker. He did show up in the climax, but its plot was confusing. The artwork by Simone Bianchi was spot on and showed a great deal of talent.

One honorable mention is “Introducing The Dove Corps” which shows the Joker infiltrating a UN rescue operation that refuses to kill. The team of idealistic young adventurers do not seem to recognize the Joker and bring him along with shocking results. It is writing by the late, great Denny O’Neil and his storytelling abilities are top-notch, along with excellent artist Jose Luis Garcia-Lopez who brings the story to a vivid reality.

Overall, the stories and accompanying artwork are impressive and truly capture the nature of the Joker and how he infects Gotham City with his evil and violence while frustrating the Batman and his allies. I love how they interlaced the stories with several cover galleries of Joker features. It really showed the legacy of the Clown Prince of Crime as a villain. It is a compliment to how far the character has come and evolved over the years into becoming one of the most iconic villains of all time.

As an aside, DC Comics released it in several variant covers, but I, of course, had to go with the one by Greg Capullo (seen above) who is one of my favorite comic book artists.

What do you think? Let me know in the comments below. Tell me if there is a comic book, movie, or novel you would like me to review. While you are at it, check out my comic book reviews of Batman: The Adventure Continues Issue 1 and J.J. Abram’s Spider-Man Part 3. Don’t forget to like, share, and subscribe for more posts like this one.