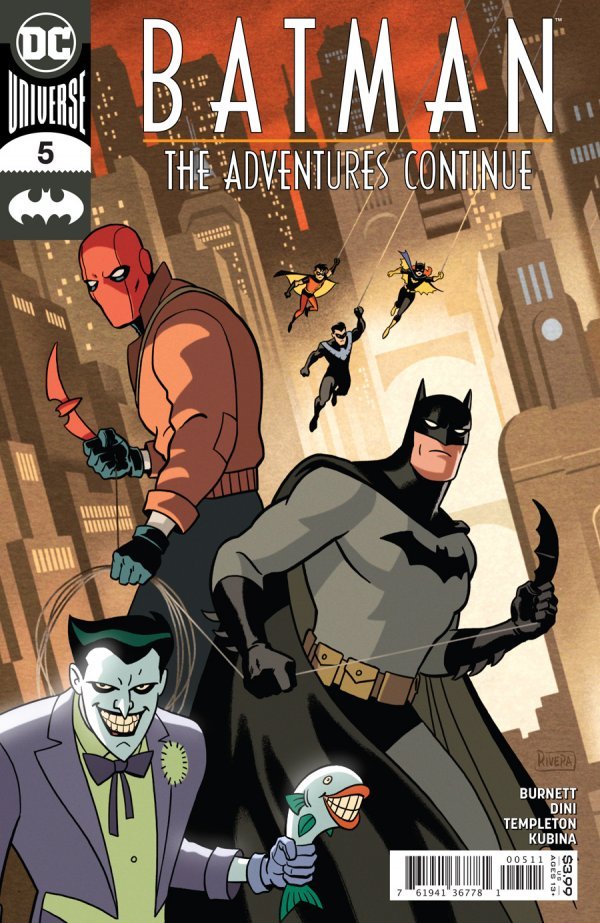 Like the previous installments, Batman: The Adventures Continue issue five is written by Paul Dini and Alan Burnett with artwork from Ty Templeton and colorist Monica Kubina. It puts a new twist on an old tale.

Batman confronts the team’s mysterious stalker. It is none other than the second Robin, Jason Todd, now going as the Red Hood. After an initial meeting, Batman goes off to find him, the Red Hood is after the Clown Prince of Crime for revenge. Meanwhile, Alfred speaks to Tim Drake, the current Robin, and explains the complicated history of Bruce Wayne and Jason Todd.

Once again, the artwork does an excellent job of capturing the original feel of Batmans: TAS. You can definitely feel how much the team behind it love the work they are doing based on the care they work with the character designs. I was a bit confused by Nightwing’s appearance on the cover as he has not yet appeared yet in the series.

As for the story, I do like the new take on Jason Todd. Since the Joker was never the Red Hood, they tied it to a gang that a family member belonged to. While it is a different spin, it did feel somewhat rehashed, but Dini and Burnett do it with such good writing, I barely noticed. However, the battle between Batman and Red Hood is gearing up for an epic showdown and I am here for it.

What do you think? Let me know in the comments below. Tell me if there is a comic book, movie, or novel you would like me to review. While you are at it, check out my comic book reviews of the first issue of Iron Man 2020 and SHI: Return of the Warrior. Don’t forget to like, share, and subscribe for more posts like this one.