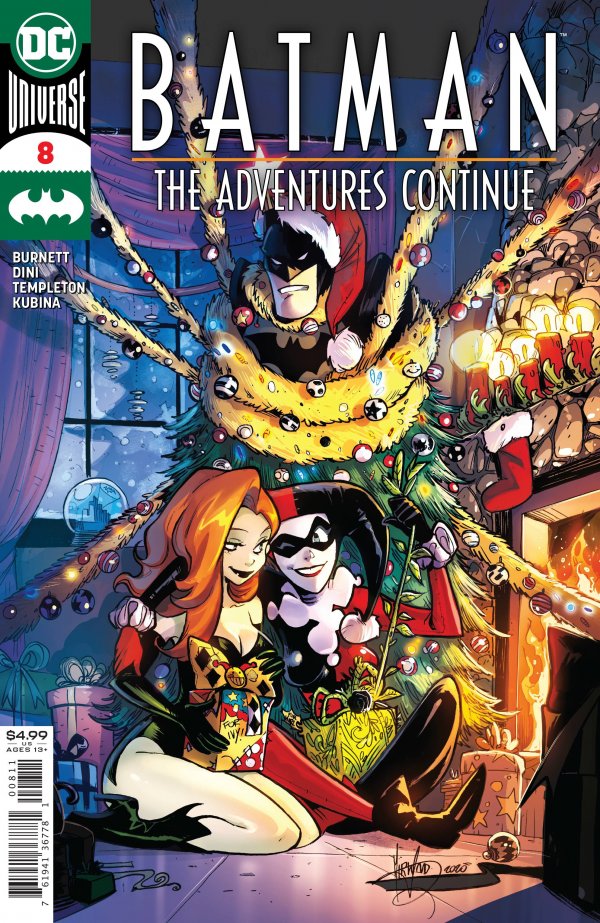 Issue eight of ‘Batman: The Adventures Continue’ is written by Paul Dini and Alan Burnett. It is published by DC Comics with illustrations from artist Ty Templeton and colorist Monica Kubina.

The Ventriloquist aka Arnold Wesker and his dummy Scarface are defeated once again after Batman stops them from turning a blimp into a bomb. The dynamic duo set it off prematurely, but half the explosives are missing. Wesker claims to have no knowledge of where Scarface hid them. With Christmas nearing Gotham City, the Joker decides to party crash a Christmas soiree Poison Ivy and Harley Quinn are hosting. He wants to get to Wesker and learn the whereabouts of the missing explosives so he can throw his own Clown Prince of Crime caper.

No issues with the artwork. As usual, Templeton does a great job of matching the style of Batman: TAS. I did like the story. The introduction of Wesker was perfect as well as the Joker’s scheme with Scarface. That being said, I thought the subplot with Harley Quinn and Poison Ivy was a bit forced and unnecessary. It was a minor detail and nothing earth-shattering. Otherwise, I was hooked to the story and love reading about the Batman and Robin in this arc. It is far better than anything else DC Comics or DC Films is putting out.

What do you think? Let me know in the comments below. Tell me if there is a comic book, movie, or novel you would like me to review. While you are at it, check out my comic book reviews of the first issue of Star Wars Adventures: Shadow of Vader’s Castle and Red Rooster issue 2. Don’t forget to like, share, and subscribe for more posts like this one.