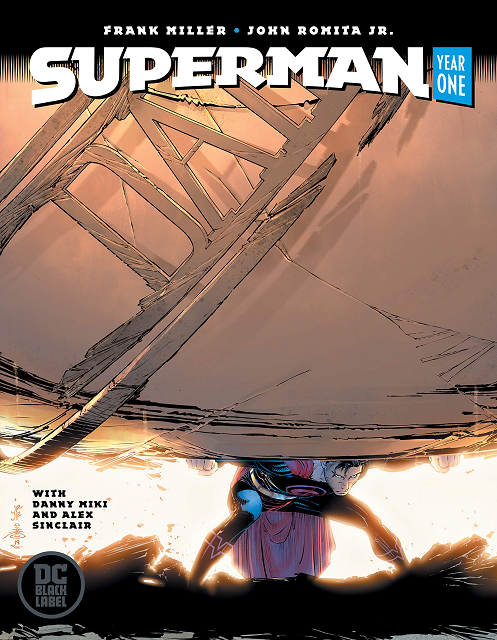 Iconic writer Frank Miller has written across the comic book industry for titles such as DC Comics’ Batman, Marvel Comics’ Daredevil, Image Comics’ Spawn, and the Dark Horse anthology Sin City. Now he partners with artist John Romita for a brand new take on the Man of Steel with DC Black Label’s Superman: Year One.

The story starts with the infant Kal-El being found by the Kents after he sent to Earth from Krypton. After being named Clark by his adopted parents, he starts to realize from an early age that he has special abilities. It shows us his first love with Lana Lang, his time serving in the US military, his introduction to Atlantis, and his first encounter with Batman and Wonder Woman. From Smallville to Gotham City to Metropolis, we watch as the Man of Steel develops into an icon.

Typically, I am not a fan of the style of artwork for comic books. I find it too busy while also not giving enough details on the characters. For the first issue, I felt like Romita did a good job complimenting the plot. It was the second and third parts that I felt were a bit rushed. That goes for the covers as well. Now, this graphic novel cover is fine, but the individual ones did not impress me that much.

As for the story, I did have some thoughts. In the first issue, Clark is in love with his high school sweetheart Lana Lang. She sees him off to the military and bids him a fond farewell. Likewise, his parents play an important role. However, in the second issue, neither his parents nor his Smallville friends are given more than passing references. After being given an honorable discharge in the Navy, Clark meets an Atlantean beneath in the ocean and falls in love with her.

Likewise in the final issue, neither romantic partner is shown or mentioned. His love of the ground and the sea is gone and instead, he travels to the sky. Each part felt like its own standalone story that does not connect in a meaningful way. Sure, they are entertaining individually, they do not have any real impact on the overall story once you move on to the next chapter. Compared to other attempts to reboot Superman, this series was definitely interesting and showed a Clark Kent who was adjusting to his growing abilities as Superman.

Originally, it was up for debate whether it was part of Miller’s “Dark Knight Universe,” but it has been confirmed that it takes place in the same world as titles such as Batman: Year One. While I find the content interesting, particularly his new take on Superman’s relationship with Luthor, I still found the bouncing timeline a bit confusing.

As an aside, what I appreciate about Miller is how he portrays Batman. Yes, it is darker than I prefer, but I like a Bruce Wayne who enjoys being the Dark Knight. Instead of the confused or obsessive Bruce Wayne, he is a vigilante who loves to fight the bad guys, leaving them with broken bones and lots of bruises. I am not a fan of the Dark Knight sporting a gun (even just for show), but the Caped Crusader who loves his “job” is one that I appreciate. There is one bit of inconsistency in this to the “MillerVerse.” In All-Star Batman & Robin: The Boy Wonder, the Justice League seems to just be painfully aware of Batman, with Wonder Woman wanting to kill him. That’s why they send Green Lantern to talk to him to avoid a deadly confrontation. In this graphic novel, Batman and Superman have a standoff that is interrupted by Wonder Woman who says they must ally. So they kind of just do.

Overall, I did find Frank Miller’s take on Superman, a flying, tough boy scout, to be more unique than his usual portrayal of the Man of Steel as a powerful dolt. That being said, the unconnected nature of the story makes it difficult to understand the direction of the plot. I find myself slightly disappointed with it, hoping for more.

What do you think? Let me know in the comments below. Tell me if there is a comic book, movie, or novel you would like me to review. While you are at it, check out my reviews of Batman: Universe and Feast Or Famine. Don’t forget to like, share, and subscribe for more posts like this one.