Graphic Novel Review- The Fall And Rise Of Captain Atom 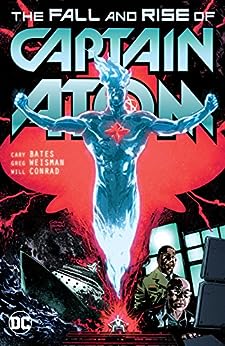 Captain Atom has always been un underrated superhero, having resurgences here and there. Written by Cary Bates and Greg Weisman with art from Will Conrad, The Fall And Rise Of Captain Atom tells the DC Comics character from a new perspective as part of their “Rebirth” in 2018.

During a friendly encounter with the Justice League, Captain Atom begins to become unstable, so Superman rushes him to a military facility, but not before he explodes, causing multiple casualties. Captain Atom turns himself into the military and explodes for what he thinks is the final time. However, he does not die and awakens powerless in 1996, setting for a new adventure where he finds himself in the past and later again in the future where he faces a terrifying new enemy.

I will say, The artwork by Will Conrad is exceptional. He does a good job of illustrating the characters, especially both versions of Captain Atom. The New 52 has the familiar blue hue and the ner version is silver sleek with some red shading. Now, I am more partial to the blue coloring as it is the one featured in the animated series Justice League Unlimited. Now, that is a personal preference and not a statement on Conrad’s talent which is tremendous as you can see by how epic he draws Superman, Cyborg, and Green Lantern.

The story itself is very interesting and intriguing. I do like that they took away the “energy-based lifeform” version of Captain Atom and returned him to his Post-Crisis powers of being able to manipulate the quantum field. I also liked his adversary Ultramax who proved more than a match for the nuclear-powered hero. I will say, the comic book spent way too much time discussing the theories of time-travel, quantum mechanics, and the science behind Captain Atom’s powers. Personally, I found those parts incredibly boring as they really added nothing to the story, other than to make Captain Atom seem more “realistic.” However, the action and the story behind Captain Atom has always been intriguing to me and this graphic novel does a good job of restoring him to his former glory.

What do you think? Let me know in the comments below. Tell me if there is a comic book, movie, or novel you would like me to review. While you are at it, check out my reviews of the graphic novels Awakening: A Christmas Episode of the Starlight Chronicle and Ayn Rand’s Anthem. Don’t forget to like, share, and subscribe for more posts like this one.