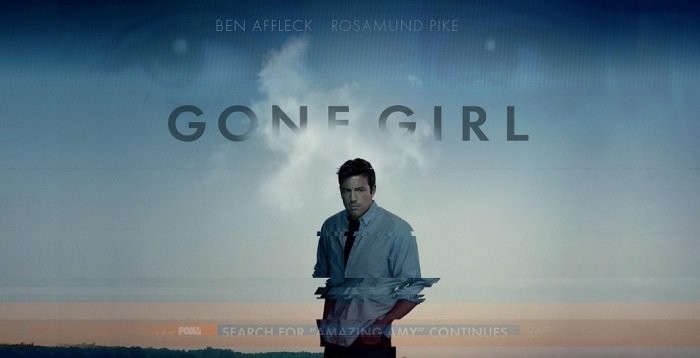 David Fincher directs the 2014 psychological thriller ‘Gone Girl,’ based on the similarly titled novel by Gillian Flynn, who also penned the screenplay. Reese Witherspoon served as a co-producer.

Nick Dunne (Ben Affleck) is a college professor living in Missouri with his wife Amy (Rosamund Pike), a minor celebrity whose parents have written the “Amazing Amy” children’s book series on her life. On their fifth wedding anniversary, Amy seemingly goes missing with the only clue being a broken coffee table. Detective Rhonda Boney (Kim Dickens) is, at first, sympathetic, but soon turns suspicious due to Nick’s bizarre behavior during the search. With the help of his twin sister Margo (Carrie Coon) and his lawyer Tanner Bolt (Tyler Perry), Nick follows a series of clues left behind by Amy to unravel the secrets, even locating ex-boyfriend Desi (Neil Patrick Harris), but the public soon turns against Nick when more secrets are unveiled.

David Fincher and Gillian Flynn take the story of a vanishing wife, a suspicious husband, intrepid police, media frenzies, and flips them on the head. I have not read the novel on which the movie is based, but considering Flynn’s involvement with the script, I have a feeling it was similar in tone and depth. We have all seen these cases. Often, the husband is falsely maligned and other times, he is rightfully accused. No matter the situation, these staples, particularly the media frenzy, are all on display.

The tension and mystery in the film hit you from the beginning and you feel it throughout. Even as more secrets are revealed, you are pulled deeper into the twists and turns as Nick, an imperfect protagonist is trying to navigate the maze. Amy, the imperfect victim, leads you on the journey, hearing her side through diary entries that may or may not deceive you. With Flynn’s writing and Fincher’s unique directing-style, they pull you in and you are hooked. I did not lose interest or even glance at my phone during the entire duration.

As for the performances, Affleck plays it incredibly muted and at first, I was confused, but it worked for the film. Same with Pike, she is enthralling and her performance is the spotlight of the film. Perry’s appearance is small, but this is one of the best performances I have seen him as far as serious roles. I would also like to shout out Harris, who plays against type as the comedic sidekick and plays a snobbish, brooding intellectual who is not keen to be involved… until a secret is revealed.

Botton line, Gone Girl is an excellent psychological thriller that keeps you on the edge of your seat the entire time. With dynamite performances, an excellent story, and plenty of turns, it will keep you hooked.

FAVORITE QUOTE: Whatever they found, I think it’s safe to assume that it is very bad.

What do you think? Let me know in the comments below. Tell me if there is a comic book, movie, or novel you would like me to review. While you are at it, check out my movie reviews of The Ramen Girl and No Way Back. Don’t forget to like, share, and subscribe for more posts like this one.