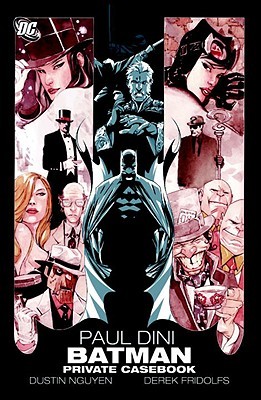 DC brought us ‘Batman: Private Casebook‘ in 2008. It is a graphic novel collection of comic books from the great writer Paul Dini and Peter Milligan with artwork from Dustin Nguyen.

Batman is having a time. He faces off against Ra’s al Ghul as the eco-terrorist tries to get a foothold into Gotham City, but that is not all. He also has to bring down Mad Hatter and the Wonderland Gang, deal with the Suit of Sorrows, and works with Zatanna in dealing with the Ventriloquist and Scarface. However, will a supposedly reformed Riddler be able to outsmart them all? With all of these villains on the loose, how does Scarecrow fit in with the mysteries?

Honestly, this graphic novel does not follow a single story arc but is a collection of Paul Dini’s work during the 2007 run of Batman. That being said, it does not need to follow a particular arc.

The artwork by Dustin Nguyen is amazing. He definitely has a cool look for each and every character, bringing them to life in a special way. I especially liked his illustration of Catwoman, who had a cameo in the series.

No one can dispute that Paul Dini knows Batman. He has a commanding presence when it comes to Dark Knight. Even for something that came out in the early 2000s, it is leaps and bounds better than anything DC Comics is putting out these days. It is a compliment to Dini and how imaginative he is when it comes to tales of Gotham City.

What do you think? Let me know in the comments below. Tell me if there is a comic book, movie, or novel you would like me to review. While you are at it, check out my reviews of Teenage Mutant Ninja Turtles: Things Change and Stealing Solo: A Captain’s Parody. Don’t forget to like, share, and subscribe for more posts like this one.