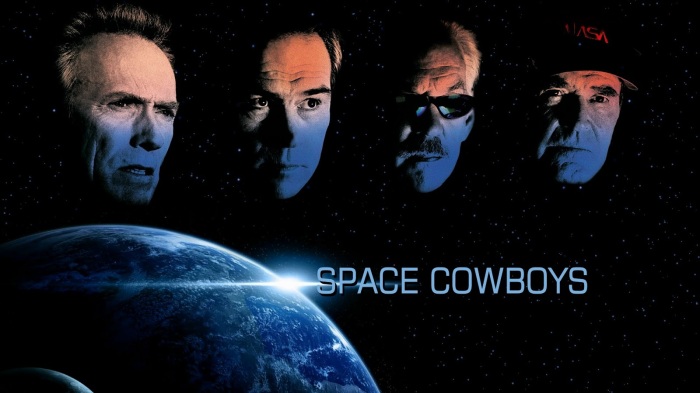 ‘Space Cowboys‘ is a 2000 science fiction adventure film directed by and co-produced by Clint Eastwood, who also stars in the film. It was made by Village Roadshow Pictures and released via Warner Brothers.

NASA project manager Bob Gerson (James Cromwell) calls on retired pilot Colonel Francis D. “Frank” Corvin (Clint Eastwood) to pilot a mission into space to prevent an old Soviet satellite IKON from crashing to the earth. Corvin does not like Bob as he sold him and his friends out years earlier when he scrubbed them from going to the moon. Franks agrees to the mission if his old teammates: Colonel William “Hawk” Hawkins (Tommy Lee Jones), Captain Jerry O’Neill (Donald Sutherland), and Captain “Tank” Sullivan (James Garner) go along. Bob plans to betray them again, but the press soon hears about the team, forcing him to work with them. The four pilots work with NASA to prepare, but soon discover that the mission may be more dangerous than they first considered.

I would like to say, this is one of the finest casts that I have seen. Eastwood, Jones, Sutherland, and Garner all deliver with their finest performances to the screen. The four of them had excellent chemistry. They brought some of the best humor to the movie and made it work. Cromwell, likewise, does a good job as the frustrated bureaucrat trying to tame these arrogant flyboys. Courtney B. Vance plays a younger astronaut and he definitely shines in this movie as well.

Eastwood does a good job as the director. He has done dramas, musicals, Westerns, biopics, and pretty much everything under the sun. This movie is a career highlight. It is enthralling, entertaining, and delivers on every level. You will not be able to turn away from the story that develops in front of you.

As a science fiction film, it does not rely on futuristic technology or alien invasions. Instead, the film tries to use the technology of the day with a few inserted enhancements to make the goal work. In a way, it is more of a drama surrounding space travel, but I do not think you can discount it from that perspective. Whether you see it as a drama film or a sci-fi adventure, it certainly has a place as one of the finest movies surrounding NASA and their mission to go to outer space.

Bottom line, Space Cowboys is a brilliant film that Clint Eastwood brings to life as both a director and actor. The rest of the cast put their talent on the highest levels and brings one excellent film.

FAVORITE QUOTE: Have you noticed how everybody seems to be dead lately?

What do you think? Let me know in the comments below. Tell me if there is a comic book, movie, or novel you would like me to review. While you are at it, check out my movie reviews of Stepfather 3: Father’s Day and No Way Back. Don’t forget to like, share, and subscribe for more posts like this one.