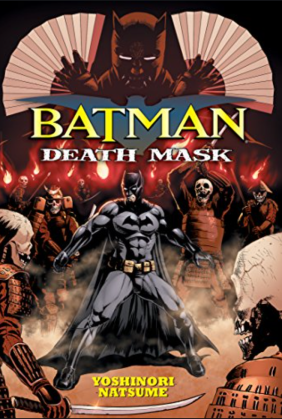 ‘Togari‘ creator and mangaka Yoshinori Natsume delved into the world of DC Comics with ‘Batman: Death Mask.’ It was released as a four-part series in 2008 and features a key element to the Dark Knight’s past.

Gotham City is being haunted by a serial killer who is cutting the faces off his victims. Batman is tracking him down, but as he does, he continues to have flashbacks to his time in Japan where he trained at a small dojo that is said to live in the shadow of an oni, or a dark spirit. As Bruce Wayne, he is meeting with representatives with the Augrama Corporation which claims to have haunted masks.. He meets the beautiful Aya Himemiya who is working at the company. She seems familiar to Batman, but he cannot quite figure out who she is or if he has met her before. When Batman witnesses a man become possessed by a mask, he must answer that question and what link this oni has to his past.

This is an incredibly well-written story. Natsume takes the story of Batman and builds on it in such an enthralling way that you are pulled in. He shows Batman as he is and he fights crime in a bold way, but also the flashbacks to his past make for an interesting twist. This connection between the villain and the Dark Knight is shown in an excellent way and truly brings out the world of Batman. Likewise, his illustrations, done in a manga-style, are pretty cool. His version of Batman and how he draws his antagonists are epic.

This book was an entry on my reading list for 2021. Will you add it to yours? I hope you do. It far better than anything DC Comics is putting out for Batman in modern times.

What do you think? Let me know in the comments below. Tell me if there is a comic book, movie, or novel you would like me to review. While you are at it, check out my graphic novel review of Ninety Four and the novel The Long Moonlight. Don’t forget to like, share, and subscribe for more posts like this one.