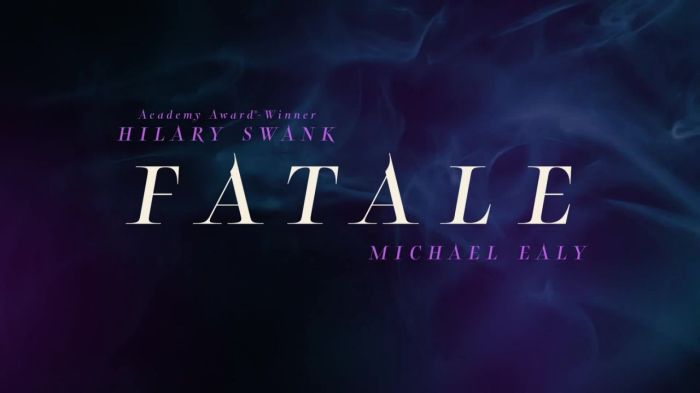 ‘Fatale‘ is a 2020 revenge thriller directed by Deon Taylor based on a screenplay by David Loughery. It was released through Lionsgate to a limited theatrical release and through video-on-demand.

Derrick Tyler (Michael Ealy) is a successful sports publicist in Los Angeles who owns a business with his best friend Rafe Grimes (Mike Colter). Though his business is successful, even producing a lucrative buyout offer, he finds himself distant from his wife Tracie (Damaris Lewis). While on a trip to Las Vegas, he meets Valerie (Hilary Swank) and the two have an affair. Feeling guilty when he returns home, he reconciles with his wife, but they are both shocked by a break-in. To his surprise, Valerie arrives as the investigating detective and seems to brush off Derrick’s concerns of her revealing their affair. However, Valerie starts to make a plan when her ex-husband Carter Haywood (Danny Pino) refuses to let her see her daughter. First, she reveals to Derrick that Rafe and Tracie are having affair. After he gets drunk, they turn up dead and he is arrested for the crime. He manages to make bail and soon, he and his cousin Tyrin (Tyrin Turner) realize she is behind the deaths, but time is running out to prove it and stop her devious plan to ruin Derrick.

The vengeful lover after an affair is a common trope that has been around since cinema was a thing. However, this movie puts a slight spin on it making it not about revenge, but about manipulation to accomplish a particular goal. That was honestly not a whole lot to make it stand out in the genre and that was the issue.

As far as acting, Michael Ealy and Hillary Swank did a good job with the acting. They obviously had the most screentime and they fleshed out the movie to the best of their abilities.

Like I mentioned above, the main issue with the movie is it just sort of average. It does not add anything to the psychological subgenre of revenge films. It has a decent story and plot, but had nothing really to make it stand out except for a few politically correct jabs that have become a boring staple in these types of movies. If that aspect’s attention had been diverted to increasing the thrills, it could have been pulled off with a much better outcome.

There were also these plot threads that sort of got ignored later on. When Derrick’s house is broken into, the plot point that starts his consequences from the affair is almost totally dropped. We never learn if had something to do with Valerie, an insurance thing, or even just some random guy. At one point, I totally forgot that his house was broken into, to begin with. There were one or two less obvious ones, but that was the biggest example.

Bottom line, Fatale is a somewhat average thriller that is fine to watch as its principal stars are the best part of the film, if you can get past some of obvious its flaws.

What do you think? Let me know in the comments below. Tell me if there is a comic book, movie, or novel you would like me to review. While you are at it, check out my movie reviews of White Lie and Midnight At The Magnolia. Don’t forget to like, share, and subscribe for more posts like this one.