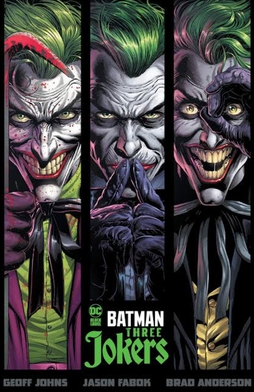 Fans had been anticipating “Batman: Three Jokers” since the DC Rebirth. The origins of the story began when Batman merged himself with the alien supercomputer called the Mobius Chair. It is said it gives all knowledge to its user, so when the Dark Knight asked, “What is the Joker’s real name?” He responds to the answer, “That’s impossible!” Later, we discover it tells him that there are three Jokers. Now, released through the DC Comics Black Label, Geoff Johns writes and Jason Fabok draws.

Three Jokers are loose in Gotham City. The Criminal, less theatrical and more focused, he is the strategist of the group. The Clown, who prefers campy humor and is slightly less lethal. Finally, there is the Comedian. He is a sadist and a monster. Batman works with Batgirl and Red Hood, his two family members who have been more hurt most by the Joker, to discover the villain’s plan. They seem intent on creating a fourth Joker or perhaps a replacement. When Joe Chill becomes involved, Batman realizes it is far more personal than he originally thought.

I enjoyed Jason Fabok’s artwork. He nails all of the heroes, but especially the villains. Now, for the three Jokers, I do wish he had given them each a unique look. I realize that they had to look similar enough where any person could be fooled, but still, except for their clothes they looked identical. I think it would have been better if they had been drawn more like their comic book counterparts based on era.

For example, The Criminal could have looked more like Jack Nicholson with his purple fedora and long overcoat, a permanent grin drawn onto his face. The Clown could have been drawn like Cesar Romero, sharper, happier, and dressed in a brighter color. The Comedian did have the most unique look, similar to how Brian Bolland drew him in The Killing Joke, but it could have been polished and shown more clownish. Now, that is nitpicking, but I think it would have given the story an extra touch of theatrical for the Joker.

Now to the story. As I stated prior, all I can say is, “bravo!” Geoff Johns brought Batman out of the sad-sack tone that has plagued the title since Tom King’s tenure. Sure, they are dealing with raw emotions, but Johns does not play it up as some form of manipulation. Yes, Batman has kept secrets, but this time, it is for the good of Gotham City, not for pride or mistrust. Bruce is genuinely sorry for his failure to protect Jason Todd and Barbara Gordon. He is genuinely shaken by the fear the Joker is spreading and wants to stop him, but not at the expense of Red Hood or Batgirl.

I cannot tell if this story will be canon, especially since it released through the Black Label and Alfred Pennyworth is still very much alive. Hopefully, this will be the standard of the Dark Knight going forward.

Whatever the case may be, it reminded me of why the Joker is Batman’s greatest adversary and I applaud it.

What do you think? Let me know in the comments below. Tell me if there is a comic book, movie, or novel you would like me to review. While you are at it, check out my reviews of Kamen America: Volume 2 and Symbiote Spider-Man. Don’t forget to like, share, and subscribe for more posts like this one.