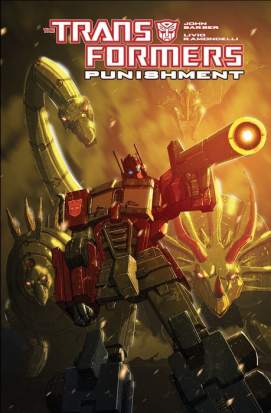 Set prior to the Combiner Wars story-arc, IDW Publishing released ‘Transformers: Punishment‘ in 2015. The story was written by John Barber with artwork by Livio Ramondelli.

Optimus Prime returns to Cybertron years after the war for the anniversary of him receiving the Matrix of Leadership. Though the Autobots have won, Star Scream has been declared the leader of the planet with newcomer Windblade acting as his second-in-command. Prime learns that someone has been killing Decepticons on the outskirts of Metroplex. The Dinobots have been investigating, but their brutality is only creating more enemies, including their old friend Sandstorm. As more Decepticons meet a fiery death, tensions run high and it seems not even Prime can stop it.

I am not a fan of the sad-sack Optimus Prime. It was that right from the beginning. I do not have a problem with showing the consequences of the war nor how Cybertron has changed. My problem is the lowly “woe is me” Prime. He is the leader of the Autobots and the one Transformer who is stoic. I do not get this obsession with making him an overly emotional punching bag for his former soldiers to whine about. I guess I can stop now. You can probably guess I did not care for it.

What do you think? Let me know in the comments below. Tell me if there is a comic book, movie, or novel you would like me to review. While you are at it, check out my thoughts on the first issue of IDW Publishing’s Transformers comic book reboot. Don’t forget to like, share, and subscribe for more posts like this one.