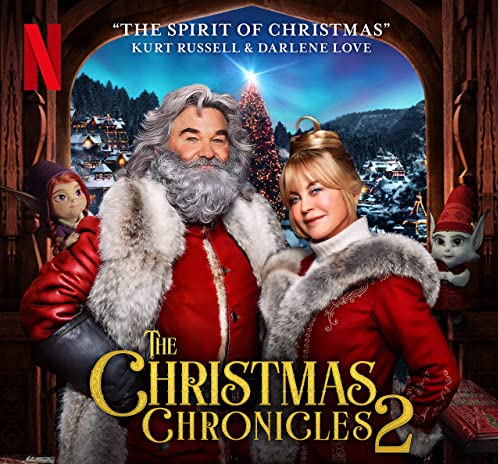 ‘The Christmas Chronicles 2‘ is directed, co-written, and co-produced by Chris Columbus. It is a holiday comedy sequel released on Netflix and made by 1492 Pictures.

Kate (Darby Camp) is feeling angry that her mother Claire (Kimberly Williams-Paisley) is dating Bob (Tyrese Gibson), whose son Jack (Jazhir Bruno) annoys her. She makes a wish that Santa (Kurt Russell) will come and rescue her, as she fears Bob will soon propose to her mother. A former elf named Belsnickel (Julian Dennison) overhears her wish and sends her and Jack to the North Pole. Santa brings them to Santa’s Village where they meet Mrs. Clause (Goldie Hawn). Belsnickel uses this to infiltrate Santa’s Village, as he has his eye on the “Christmas Star,” which gives power to the North Pole.

You might remember my somewhat tepid review of the first film. I thought it was a decent family film that you could watch with everyone at dinner with the kids. While this one keeps its family-friendly tone, it stops there.

For one thing, the movie is incredibly predictable. I guessed pretty much everything that happens in the movie from the opening theme music and there was no room for any originality in the script. It pretty much played off every Christmas trope from various holiday films, making the writing seem very lazy. Especially with Claire. She had a status in the original as a “true believer” in Christmas and she grew, but in this film, they regressed her to being a whiny teenager. It was off-putting, especially since they regulated her brother Tedd, played by Judah Lewis, too little more than a background character.

Now, I did like how they played off Santa’s lore and connected him to the real Saint Nicholas on which the story of Santa Claus was based. That brief segment was the best part of the movie that explained where Santa Claus came from, his connection to the elves, and even the story of Jesus by making the Christmas Star to Bethlehem. I could picture a movie based on that premise.

As for the acting, everyone was okay, but I felt like a few of the younger actors went through bouts where they forgot how to act. Julian Dennison was not convincing enough as an antagonist. Again, he came off as a whiny teenager who did not get his way. Had they made him a bit more sinister, it may have happened. I don’t blame Dennison for this. He was a victim of the bad writing and lack of imagination for his character.

Kurt Russell and Goldie Hawn were the highlights of the film. They provided all of the entertainment and I do enjoy their interpretations of their prospective characters. While I did enjoy their roles, they too had some lousy writing that led to some cringe-worthy moments. Especially the lame time travel segment. Yes, you read that correctly.

Bottom line, The Christmas Chronicles 2 loses all of the magic of the first one, leading the viewer on a predictable ride of subpar performances and no creative writing.

FAVORITE QUOTE: Riding around in the sleigh is like a shot of novocaine in the old buttcheeks.

What do you think? Let me know in the comments below. Tell me if there is a comic book, movie, or novel you would like me to review. While you are at it, check out my movie reviews of Borrowed Hearts, Jingle Jangle: A Christmas Journey, and Dolly Parton’s Christmas on the Square. Don’t forget to like, share, and subscribe for more posts like this one.