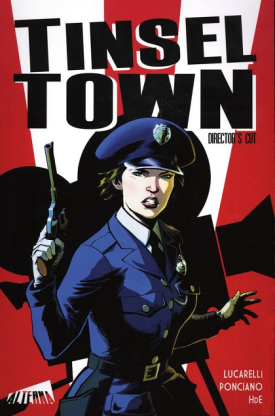 Alterna Comics brings us ‘Tinseltown‘ a 2019 comic book series written by David Lucarelli with art by Henry Ponciano and HdE. It is collected in an excellent graphic novel and is a good ol’ fashion noir tale surrounding Hollywood.

Set in 1915, Abigail Moore arrives in Hollywood, not to become a star, but to follow in the footsteps of her late father being a police officer. When the LAPD turns her down, she finds herself “acting” as a policewoman on the set of a theme park called Utopia. Convincing her to go out, her roommate Betty introduces her to the cowboy Dan, who wants to be a stuntman. After patrolling, Abigail discovers some strange events happening in the fake city that may lead to a conspiracy.

I liked how the story was set-up. Lucarelli, who is also the series creator, does an excellent job of making us connect with Abigail. Liekwise, the artwork was also pretty cool. Ponciano works to bring the characters and the actions to life. We see this in Abigail’s story and it brings you to follow in the footsteps of her cop father, who died in the line of duty. Her route from beginning to end has you hooked to the plot. It took its time and also had an excellent climax. It builds on itself and continues to bring on the action.

What do you think? Let me know in the comments below. Tell me if there is a comic book, movie, or novel you would like me to review. While you are at it, check out my reviews of Metal Militia and Valiant Comics’ 4001 AD. Don’t forget to like, share, and subscribe for more posts like this one.