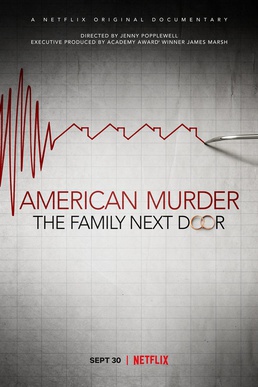 ‘American Murder: The Family Next Door‘ is a true crime documentary that tells the shocking and horrifying story of the Watts family murders. It is directed by Jenny Popplewell and was released on Netflix.

Shan’ann Watts arrived at her Colorado home at 2 a.m. after a business trip to Arizona. After that, she and her two daughters mysteriously vanished without a trace. Her best friend calls the police for a wellness check and soon her husband Chris Watts arrives to let them in. After discovering a neighbor’s security footage, the police soon begin to suspect that he made been involved. As the police investigate, they discover a monster was hiding in plain sight, one who did the unspeakable.

Using archival footage and lacking a narrator, the film pieces how Chris Watts planned and executed the cowardly and disturbing murders of his pregnant wife and their two daughters. The movie ties together footage from police boy cams, newsreels, neighborhood cameras, and even videos collected from Shan’ann Watts’ own social media pages in order to show the events leading up to the crime. It really highlighted the lengths that Chris Watts went through to hide the truth and his motive for committing these heinous acts.

I appreciated this style of documentary. Since there was no narrator or interviews, it felt like watching one long news highlight but the filmmakers did a good job of making it flow in an informative way that was interesting. Sometimes with these features that do not rely on a third party or testimony, you can get lost in all of this information, but that was not the case here. It came together and made you feel connected to the victims in this terrible case.

There were some concerns that the documentary would attempt to “victim blame” Shan’ann Watts. Many online conspiracy theories were bolstered by allies of Chris Watts who claimed that his wife pushed him to become a killer. Even a movie was made that somewhat took this perspective. Fortunately, this documentary goes out of its way to debunk these ridiculous and silly theories.

To expand on that, the documentary did an excellent job exposing Chris Watts as the monster he truly is. He murdered his pregnant wife and then his daughters with their own blankets, all of this to conceal the fact that he had been having an affair with a woman who was not involved in the crime. What is one of the most terrifying facets of this is how normal Chris Watts appears in the family home videos. There was no indication, outside of Shan’ann’s correspondence with some of her friends that anything was wrong. It is true what they say, the most terrifying monsters are the human ones.

Chris Watts is a killer and a coward and American Murder: The Family Next Door does a good job of showing the murders of an innocent woman and their three children.

What do you think? Let me know in the comments below. Tell me if there is a comic book, movie, or novel you would like me to review. While you are at it, check out my documentary reviews for Tread, The Speed Cubers, and Fishing With Dynamite. Don’t forget to like, share, and subscribe for more posts like this one.

One thought on “Documentary Review- American Murder: The Family Next Door”