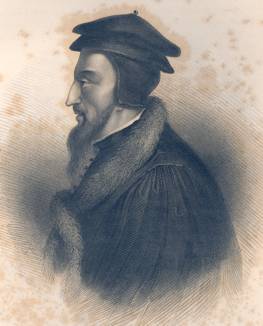 Theologian, pastor, and author John Calvin (July 10, 1509 –  May 27, 1564) is one of the foremost thinkers in the Protestant movement. His writings and teachings have inspired many, who have credited him as the chief expositor of their beliefs. Throughout his life, he worked to reform Christian thinking in how we should see God and the Gospels. Here are some words of wisdom from John Calvin.

It is certain that no man can embrace the grace of the Gospel without retaking himself from the errors of his former life into the right path, and making it his whole study to practice repentance. – Institutes of the Christian Religion

A dog barks and stands at bay if he sees any one assault his master. I should be indeed remiss, if, seeing the truth of God thus attacked, I should remain dumb, without giving one note of warning. – Letter 130,

You cannot imagine a more certain rule or a more powerful suggestion than this, that all the blessings we enjoy are divine deposits which we have received on this condition that we distribute them to others. – Golden Booklet of the True Christian Life

No religion is genuine unless it be joined with truth. – Institutes 1.4.3

For in the cross of Christ, as in a splendid theatre, the incomparable goodness of God is set before the whole world. – New Testament Commentaries (5)

We must resist wandering thoughts in prayer. Raising our hands reminds us that we need to raise up our minds to God, setting aside all irrelevant thoughts. – Institutes of the Christian Religion

It is no small honour that God for our sake has so magnificently adorned the world, in order that we may not only be spectators of this beauteous theatre, but also enjoy the multiplied abundance and variety of good things which are presented to us in it. – Works

If everything proceeded according to their wishes, they would not understand what it means to follow God. – Golden Booklet of the True Christian Life

The fetus, though enclosed in the womb of its mother, is already a human being (homo), and it is almost a monstrous crime to rob it of life which it has not yet begun to enjoy. If it seems horrible to kill a man in his own house than in a field, because a man’s house is his place of most secure refuge, it ought surely to be deemed more atrocious to destroy a fetus in the womb before it has come to light. – Commentary on the Four Last Books of Moses

The whole life of Christians ought to be an exercise of piety, since they are called to sanctification. – Institutes of the Christian Religion

What do you think? Let me know in the comments below. Tell me if there is a comic book, movie, or novel you would like me to review. While you are at it, check out the article: Words of Wisdom From G.K. Chesterton. Don’t forget to like, share, and subscribe for more posts like this one.

One thought on “John Calvin On Faith, Truth, and the Gospel”