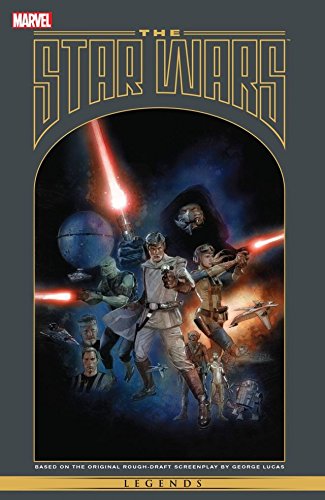 Adapted from an early rough draft written by George Lucas, The Star Wars tells the tale before the saga became the science fiction fantasy franchise that is beloved all over the world. Written by J. W. Rinzler with artwork by Mike Mayhew, Rain Beredo, Nick Runge, and Michael Heisler, this tale has a lot of familiar names, faces, and even planets, but told in a very different tone.

Luke Skywalker is one of the last Jedi Knights in the galaxy. As General Vader of the Empire approaches a planet standing in the way of total domination, an old ally of Luke asks him to take his young son Annikin as an apprentice to teach him the ways of “The Force Of Others.” After the king of the planet is murdered, Luke must rescue Princess Leia and her twin siblings to reestablish control before the dark lord of the Sith arrives to wipe out the last of the resistance and control the galaxy.

This eight-part series from Marvel Comics has the same feel and tone as Star Wars, but in a different setting. I enjoyed seeing the point where the story of Star Wars evolved. All of the familiarity is there. A father who is more machine than man. A princess who is in danger. A Jedi master teaching a young hotshot. Yet, it is all from a different angle. It was interesting and the artwork was done by the impressive team who brought the story to life. While different and non-canon, The Star Wars definitely should be a part of the franchise’s lore.

What do you think? Let me know in the comments below. Tell me if there is a comic book, movie, or novel you would like me to review. While you are at it, check out my Star Wars Movies Ranking. Don’t forget to like, share, and subscribe for more posts like this one.