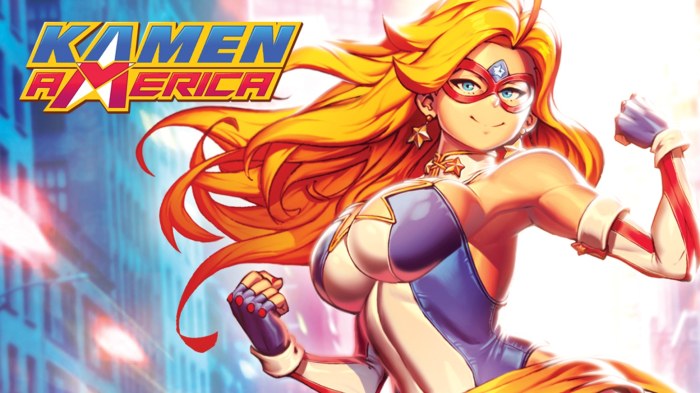 ‘Kamen America Volume 1: Stars And Stripes‘ is an indie comic book from Timothy Lim and Mark Pellegrini under the banner Iconic Comics. The project successfully used crowdfunding to raise the capital to publish it.

Carly Vanders is a young woman trying to make her in the world as a seamstress and is having mixed results. After returning home from a USO tour, she is caught in a meteor shower. After waking up from a three-week-long coma, she finds herself in Area 51 and it is revealed she has superpowers. At first, she works as Warhen battling monsters that have appeared since the meteor shower. After the ad agency she works with tries to use her to push an agenda, she dons a new identity as Kamen America to fight the monsters and other villains on her own terms.

In full disclosure, I proudly supported this campaign because I genuinely think the creators are talented. Not in the slightest was I disappointed. The artwork is top-notch and of good quality. It was a meld of traditional comic art with a heavy manga influence, giving the characters plenty of depth and style. I especially liked the character gallery that was included in the copy I received.

The story definitely is inspired by the great comic books of the past but restores what made those stories great to begin with. There is no political correctness, making the story flow on its own without relying on politics. Sure, Lim and Pellegrini put some of their own beliefs in the story, but it is not the story itself, a common flaw in modern comics. This graphic novel instead lets Carly’s journey into becoming Kamen America come naturally without the need for boring nonsense. It is definitely worth every penny of support and adding to your collection once it is available on-demand.

Here is a photo of the set I received for supporting the crowdfunding campaign:

I'm so excited that I got my copy of 'Kamen America' from @ninjaink! I've been looking forward to this and I'm proud I supported it! Photo by: @pixie_raye #StudioJake #nerd #geek #comicbook #kamenamerica #comics #indiecomics #indie #comicbookfan

What do you think? Let me know in the comments below. Tell me if there is a comic book, movie, or novel you would like me to review. While you are at it, check out my reviews of the comic book Brotherhood of the Bat and the manga Batman and the Justice League Vol. 1. Don’t forget to like, share, and subscribe for more posts like this one.