‘My Hero Academia: Heroes Rising’ Review- Go Beyond Plus Ultra! 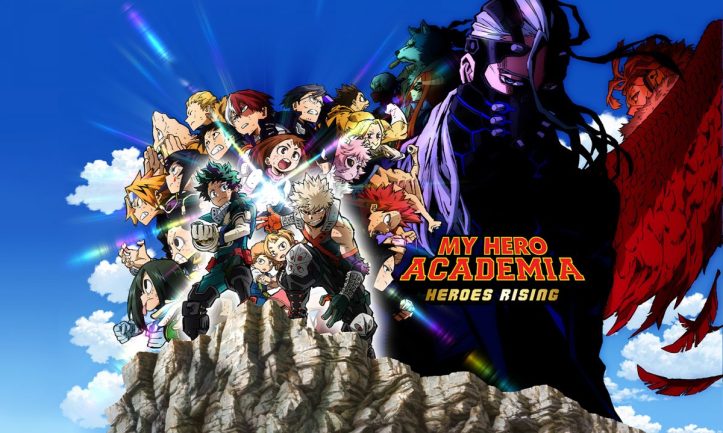 Known in Japan as ‘Boku no Hīrō Akademia THE MOVIE: Hīrōzu: Raijingu,’ Funimation did the English version of My Hero Academia: Heroes Rising, directed by Kenji Nagasaki, produced by Studio Bones, and released through the Toho Company.

Heroes-in-training and UA class 1-A students are transferred to Nabu Island to work as temporary heroes after the area’s main hero retires. The class is extremely excited to be doing “real” hero work, at least temporarily. Deku (Justin Briner), in particular, is excited to be helping out citizens of the sleepy isle while classmate Bakugo (Clifford Chapin) is bored. Things take a turn for the worse, however, when League of Villains member Nine (Johnny Yong Bosch), whose quirk can steal up to eight abilities, arrives with his gang. Him and the superstrong Chimera (Greg Dulcie), a woman with sharp hair Slice (Lydia Mackay), and Mummy (Brendan Blaber) who can control non-living things with his red tape are on the hunt for a boy named Katsuma (Maxey Whitehead) to steal his quirk that causes cell regeneration. With All-Might (Christopher R. Sabat) and the other heroes hours away, the Class of 1-A are the only ones who can stop the villains’ rampage and protect a little boy from Nine’s clutches.

I had high hopes for this movie. Studio Bones had released some early images for Chimera and Mummy, not to mention an awesome trailer. With that in mind, I have to admit, I was not let down. Studio Bones delivered on the incredible animation and Funimation delivered yet again with the dubbing. They did an excellent job. I am also pleased that this movie, like its predecessor Two Heroes, is canon to the show, taking place during season four. Some anime do not consider the films a part of the official canon, such as Dragon Ball Z: Resurrection F.

The plot is pretty straightforward and somewhat typical for a superhero film. That being said, I did enjoy the young heroes being out of their element, battling deadly villains who are after an innocent child. Nine is a truly terrifying antagonist and he reveals the vulnerabilities of the students. Their fears, their weaknesses, their breaking points, and their humanity are all on display.

While this movie is definitely for older kids, there is enough action and excitement to keep adults entertained. It is full of surprises as the plot unfolds. Now, you do have to be passingly familiar with the series to know the character. The movie does provide flashbacks and archival footage to help understand it, but it may not be enough to know the events leading up to the film.

Bottom line, My Hero Academia: Heroes Rising is exciting and entertaining. It is perfect for anime fans, fans of the show, and even for newcomers who are looking for a classic battle between good and evil.

FAVORITE QUOTE: We’re going to kick the crap out of those losers.

What do you think? Let me know in the comments below. Tell me if there is a comic book, movie, or novel you would like me to review. While you are at it, check out my movie reviews of the ‘Sonic The Hedgehog’ OVA and ‘Steins;Gate: Load Region of Déjà Vu’. Don’t forget to like, share, and subscribe for more posts like this one.