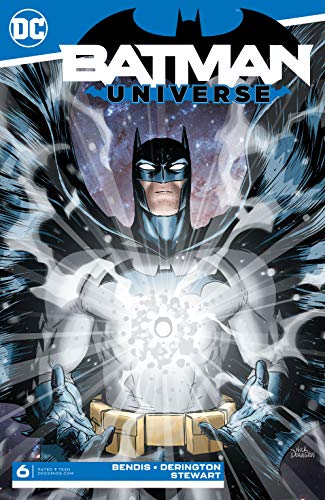 Comic book writer Brian Michael Bendis’ Batman Universe miniseries comes to its conclusion with the sixth and final issue from DC Comics. This series has gone from the streets of Gotham City, into the past, and then back to the base of the villainous Vandal Savage.

Following issue five, Batman has been absorbed into the White Lantern Ring which proves to dysfunctional. While inside, Nightwing tries to keep the Green Lantern Corp from killing the Dark Knight. After some convincing, the White Lantern releases Batman but then chooses Vandal Savage as its user. The villain then erases Batman from history, but the new Bruce Wayne without the mask knows something is off and confronts the Riddler about the journey of the egg and where Vandal Savage is located.

Bendis does a good job of developing the Dark Knight. Except for a few squabbles I mentioned in previous reviews, I found the series incredibly enjoyable. As Batman travels from Gotham City to Dinosaur Island to the Old West and finally to the showdown with Vandal Savage, I enjoyed every minute of it. It was nice reading the detective-side of the Caped Crusader as other writers focused his harshness. This was a reprieve from that and was enjoyable. Likewise, Nick Derington did a good job on the artwork, both on the pages and on the covers. I liked how he did the character designs simply and it worked well with the tone.

I stated earlier that I did not know what to expect from Bendis. While he has written complex characters in the past, he had not done anyone like Batman and I personally think he did a good job keeping the Caped Crusader a dark character while not draining the humorous side of Batman. That was excellent writing and character development. Perhaps we will see more from Bendis in Gotham City in the future.

What do you think? Let me know in the comments below. Tell me if there is a comic book, movie, or novel you would like me to review. While you are at it, check out my comic book reviews of Cyberfrog: Bloodhoney and Part Three of J.J. Abrams’ Spider-Man miniseries. Don’t forget to like, share, and subscribe for more posts like this one.