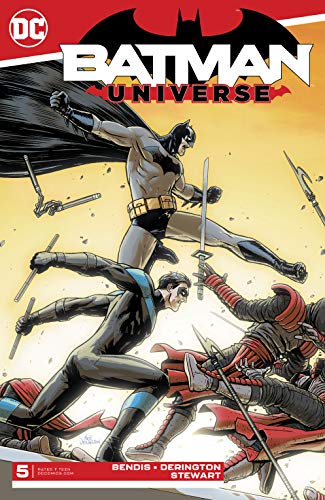 Brian Michael Bendis continued his Dark Knight saga with Batman Universe issue five. What began as an investigation into the Riddler stealing a decorative egg with Green Arrow, it turns out to be a powerful item that sends Batman on a journey through time and space.

Following issue four, Batman is dying in Crime Alley in Gotham City. As he prepares to go, he feels a surge of energy just as Alfred Pennyworth fines him. He is soon completely healed. After checking on Hal Jordan, Nightwing arrives in the Batcave to help solve the case of the strange egg. The dynamic duo then set out together to track down Vandal Savage and soon discover that the egg is actually a container for a powerful item known as a White Lantern ring and the Green Lantern Corp wants it back.

Bendis’ story is incredibly random. From chasing the Riddler, to visiting Hawkworld, to traveling to the Old West, and then nearly dying, it would seem to be a mesh, but it actually is not. Bendis brings the story together and makes it flow so well. I also liked how he writes the personality of Bruce Wayne. While he is dark and serious, he likes the harshness that has been forced on us by modern writers like Tom King, even having a sense of humor. It was refreshing. Nick Derington also does a great job with the artwork. It matches the tone of the story and he does a good job fleshing out the story.

What do you think? Let me know in the comments below. Tell me if there is a comic book, movie, or novel you would like me to review. While you are at it, check out my Top 10 Favorite Robert Pattinson As Batman Fan Art (So Far). Don’t forget to like, share, and subscribe for more posts like this one.