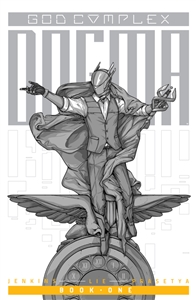 Ever wonder what the mythology of the ancient pantheon would like if it was put in a cyberpunk scenario? Top Cow Productions and Image Comics brings us God Complex: Dogma. Written by Paul Jenkins with art by Hendry Prasetya, this brings Roman mythology and philosophy into a science fiction realm.

In the city of Delphi, police detective Seneca finds three dead bodies, all members of the Church of Trinity. As he investigates, he hears a voice in his head, making him doubt his sanity. City leader Hermes takes a peculiar interest in this case and even introduces Seneca to “The Stream,” a way for the leaders of Delphi to track the movements of their citizens. The Church of Trinity has been trying to break the hold of the stream and it appears they are escalating to murder. The powerful leader Apollo is also taking an interest as more breaches are made on the leaders’ hold. It is clear something is not what it seems and Seneca is caught in-between the Church and the mighty rulers who think they are deities.

This is one of the sleekest modern redesigns of the Roman myths I have seen in a long time. I know I am a bit late since this series came out in July 2018, but it is one of the best I have read from Top Cow. Plot-wise, it is extremely well-written and a good look at how the elites of society look down upon the citizens that are in their care.  Also, the story-arc is impressive. Seneca begins what is suppose to be a simple murder investigation that soon turns into a conspiracy of the highest proportions. It is fascinating to read.

I also want to compliment the artwork, particularly the character designs. Prasetya did the art, but Bryan Lie, who also created the series, did a lot of the design. It is incredibly done and excellent. I loved how the “god” characters had cybernetic helmets. Apollo, Hermes, Hephaestus, and Athena all had designs that both matched their mythological foundation while combining the cyberpunk into their looks.

It was thrilling, exceptionally written, and one of the most well-designed stories. I highly recommend it.

What do you think? Let me know in the comments below. Tell me if there is a comic book, movie, or novel you would like me to review. While you are at it, check out my reviews for the first season of Black Clover and Fruits Basket season one. Don’t forget to like, share, and subscribe for more posts like this one.