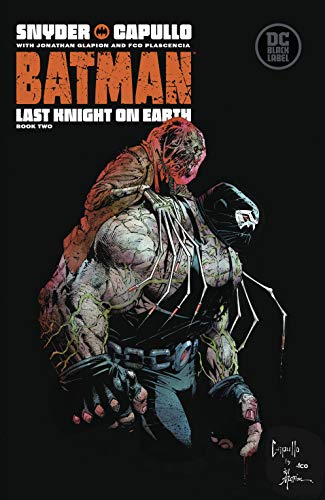 Writer Scott Snyder and artist Greg Capullo are together again for Batman: Last Knight On Earth. The DC Comics Black Label takes the Dark Knight out of the mean streets of Gotham City and into an Earth decimated after a cataclysmic event, killing most of the Justice League and wiping out a big population of the Earth.

Picking up after book one, Batman continues to wander with Joker’s head trapped in a lantern. He encounters the Flash family, trapped in a Speed Force tornado and a massive Swamp Thing attacking survivors. When he arrives at the Fortress of Solitude, he solves the mystery of Superman. Meanwhile, Bane and Scarecrow are sent by the villainous Omega to stop Batman before he finds out the truth.

While this one had a little bit more information than the previous issue, I still find it hard to believe that only Wonder Woman a few other Justice League members could survive. We could a good glimpse at the body count of the ones who tried to fight Omega, but the absence of Hal Jordan is still strangely noted. Swamp Thing, Flash, Lex Luthor, and others have appeared, but the most popular Green Lantern missing from the story seems odd.

What do you think? Let me know in the comments below. Tell me if there is a comic book, movie, or novel you would like me to review. While you are at it, check out my comic book review of Detective Comics 1009-1011 and Rosemary Dewar’s piece responding to Frankin Graham’s ‘Joker‘ comments. Don’t forget to like, share, and subscribe for more posts like this one.