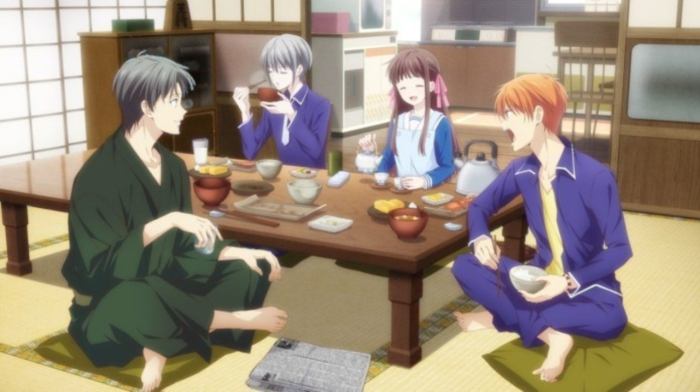 Fruits Basket is a ‘slice of life’ anime, based on the young adult Furūtsu Basuketto manga written and illustrated by Japanese author Natsuki Takaya. Published from 1998 – 2006 in the ‘Hana to Yume’ magazine, it was first adapted in 2001 but was rebooted in 2019 by the Tokyo-based TMS Entertainment, with Funimation doing the English dubbing. After subscribing, to Funimation NOW, my wife and I stumbled on this rebooted Kawai (or charming and childlike) show by accident and began watching out of curiosity. Though I was prepared to thoroughly hate it, I actually found this fantasy soap opera to be incredibly addictive.

Kind-hearted high school student Tohru Honda (Laura Bailey) is forced to move out of her grandfather’s house because of renovations. Since her parents have passed away she chooses to live in a tent in a nearby forest instead of burdening her friends Arisa (Elizabeth Maxwell) and Saki (Jad Saxton). After passing by a house, she realizes her classmate Yuki (Eric Vale), a boy popular with the ladies who call him ‘Prince Yuki,’ lives in the vicinity with his family member and popular author Shigure (John Burgmeier).

They discover her living conditions, they offer to allow her to stay with them in exchange for housework. At first, she refuses, but when Kyo (Jerry Jewell) arrives to fight Yuki, she accidentally embraces all of them. In a bizarre twist, Kyo turns into a cat, Yuki into a rat, and Shigure into a dog. They are part of the Soma family, who are cursed with being possessed by the animals of the Chinese Zodiac. Any time someone of the opposite sex touches them, they transform. Tohru decides to stay with them and help them protect their secret. As Tohru meets more family members, Shigure holds secret meetings with the head of the Soma family leader Akito (Colleen Clinkenbeard), a cruel, sadistic woman of whom everyone is scared.

Like I said, I did not think I would like this television show, but I was hooked from the first episode. While the series is mainly drama that revolves around Tohru’s dealings with the Somas annoyance by her and her friends.

Perhaps that is what is so enduring about the show, most of the Somas seem annoyed by her at first, but they all soon latch onto her because of her of the kindness that radiates from her heart. As the Somas struggle to keep their secret buried, they all find solace in the kindness of Tohru, who has every reason to be angry at the world. Both of her parents are dead, her grandfather is getting too old to care for her, and the rest of her family are “unpleasant.” She chooses joy over sorrow, and that pulls the Somas to her.

That is something not usually highlighted. While Tohru’s naivete is somewhat poked fun at, her innocence and kindness are portrayed as strengths that cause the Somas and her friends to be drawn to her magnetically. They see it as a thing to protect. When one Soma bullies Tohru, Kyo, who was originally annoyed by her, defends her and demands that she be treated with respect.

It is a rarity to see kindness, purity of heart, and just overall goodness uplifted as an example. I found that enduring. Aside from that, the show is genuinely entertaining with lots of fun drama, crazy antics, and hilarious banter that makes this Fruits Basket reboot an enjoyable break from the cares of life.

Check out the clip from the pilot episode below:

What do you think? Let me know in the comments below. Tell me if there is a comic book, movie, or novel you would like me to review. While you are at it, check out my movie reviews of Crypto and Being Frank. Don’t forget to like, share, and subscribe for more posts like this one.