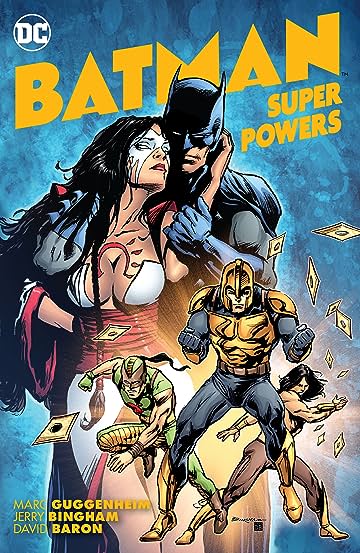 Screenwriter Marc Guggenheim (best known for Arrow, Legends of Tomorrow) tries his hand at writing a comic book storyline for DC Comics. Along with artists Jerry Bingham and Mark Farmers they bring us the graphic novel Batman: Super Powers, collected from Batman Confidential #50-54.

In the early days of the Dark Knight protecting Gotham City, Batman watches as a young woman dies in his arms. He swears to solve the mystery which he traces to an early mission from the Justice League with Wonder Woman, Flash, Green Lantern, Aquaman, and Martian Manhunter. Soon, the bodies start to pile up, Batman searches the streets for a predator that will stop at nothing until he gets what he wants.

This graphic novel is about consequences. Though an early Justice League mission stopped the predator before, there was no follow-through and Batman has to stop the creature as it terrorized Gotham City. Avoiding all of the flashiness that a lot of writers try to throw in, it was concise and the flashbacks to Batman’s training was interesting to read. It was well-written, well-drawn, and had a real impact on the early days of the Dark Knight. I liked the way Guggenheim wrote this story.

What do you think? Let me know in the comments below. Tell me if there is a comic book, movie, or novel you would like me to review. While you are at it, check out my documentary review of Untouchable and my movie review of Psycho. Don’t forget to like, share, and subscribe for more posts like this one.