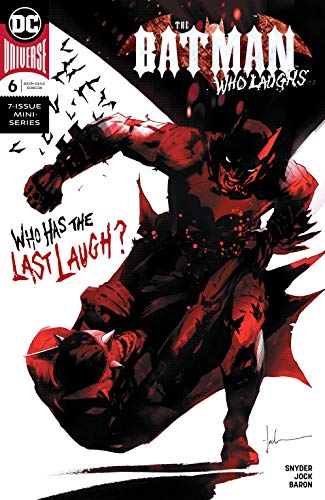 Writer Scott Snyder and artist Jock are back with The Batman Who Laughs Miniseries Issue 6. This is truly a dark DC Comics run that brought out the compromising side of Bruce Wayne as well as the danger Gotham City truly is in.

Picking up from issue 5, Batman has embraced his dark side after being infected with a toxin released from the Joker. He is slowing becoming the Batman Who Laughs, but the Dark Knight thinks it is the only way to stop him and the Grim Knight. He has been to several alternative realities and met other versions of himself. Going against the advice of Commissioner Gordon and his son James, Batman releases “the last laugh” protocol which is meant to protect Gotham City in the event Joker toxin covers the city. However, he has one trump card to play in facing off the Batman Who Laughs and stopping him from turning Gotham into his throne.

This issue was a bit confusing, especially after the events of the previous issue. In the fifth issue, Batman seems to embrace his inner monster, wanting to give into the Batman Who Laughs. Now he seems to have a back-up plan. I feel like this part was retconning the previous issue. I know the series was suppose to be six issues being expanding to seven. Perhaps this issue served as a place holder to transition into the finale. At least, that is what this particular felt like.

What do you think? Let me know in the comments below. Tell me if there is a comic book, movie, or novel you would like me to review. While you are at it, check out my movie review for Spider-Man: Far From Home and my Top 5 #StrangeThingsToBringBack Tweets. Don’t forget to like, share, and subscribe for more posts like this one.