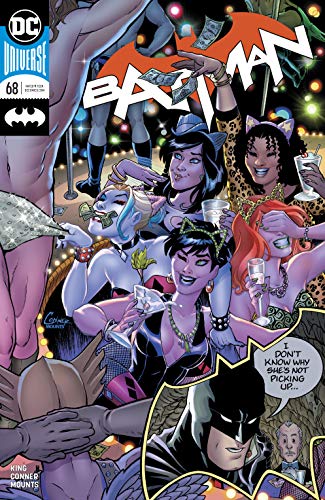 Following the KGBeast’s attempted murder of Nightwing, DC Comics writer Tom King has taken us on a thrill ride from Gotham City to Russia and back again where Batman discovered that Bane and the Flashpoint version of his father have been secretly running the crime in the city from Arkham Asylum. No one believes Batman since it appears Bane is an invalid after his last battle with the Dark Knight, creating a strain with his relationship with Commissioner Gordon.

Except for a brief and disappointing team-up with The Flash, Batman has endured nightmares where he sees Damian as Professor Pyg, Catwoman dying in Batman’s arms while being consoled by John Constantine, and the Question interrogating Catwoman on why she left Bruce. 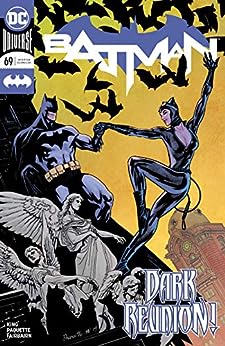 Now we come to the finale in issues 68 and 69.
In issue 68, we are treated to a bizarre story where Catwoman and Louis Lane are having a bachelorette party in the Fortress of Solitude while Bruce Wayne and Clark Kent quietly enjoy an evening in Wayne Manor. It is here where Bruce reveals he knows that he is hooked up to a machine and being pumped with Scarecrow’s fear toxin and now he is fighting back subconsciously. In issue 69, Batman and Catwoman dance as they talk about why Selina Kyle left Bruce Wayne at the altar. She explains that he was more in love with “needing to be Batman” than he was with her. Meanwhile, Flashpoint Thomas Wayne and Bane seem to be strained.

‘Knightmares’ has been an incredibly weak story. Tom King had such a great start from the beginning and into the ‘War of Jokes and Riddles.’ However, it all fell apart after ‘The Wedding’ issue which was not real. He had built up this relationship between Bruce and Selina before dashing our hopes. He seemed to regain his footing with the Nightwing arc, but almost immediately fell apart again.

It seems like the fans have spoken about this and, for once, the industry heard them. According to HN Entertainment, Tom King will cease being the head writer for Batman following issue 85. He has not been totally fired by DC Comics, as he will be working on other projects for them.

What do you think? Let me know in the comments below. Tell if there is a movie or graphic novel you would like to review. While you are at it, check out my movie review of the documentary Behind The Curve and my review of issue four of The Batman Who Laughs. Don’t forget to like, share, and subscribe for more posts like this one.