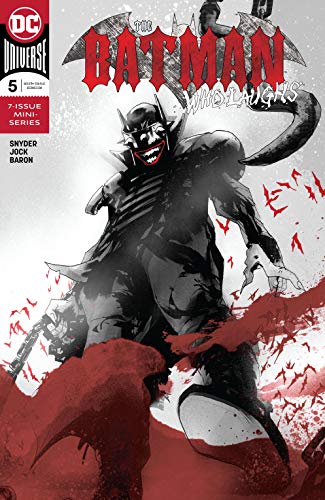 The Batman Who Laughs continues with issue 5. The title villain and his partner the Grim Knight are trying to expose Gotham City to the Joker virus and dark metal so that they can reign over a city in chaos. Only Batman, Commissioner Gordon, and Gordon’s son James Gordon Jr. can stop them.

After issue four, a Joker virus infected Batman in an alternate dimension where Bruce Wayne is the warden of Blackgate Prison. The guards think he is the Batman Who Laughs and want to kill him. Meanwhile, the Batman Who Laughs enters a dimension where the Court of Owls recruited Batman to be a talon but proceeds to wipe them out for their dark metal. All this while the Grim Knight is hunting Commissioner Gordon is the sewers beneath Gotham City.

Written by Scott Snyder with art by Jock and David Baron, this issue highlights the stakes that are being raised. Batman continues to cave to the Joker virus and grows more aggressive, dangerous, and even deadly. Gordon is faced with his failure as a father to save his son. It takes the miniseries to a whole new level and I cannot wait for the climax.

What do you think? Let me know in the comments below. Tell if there is a movie or graphic novel you would like to review. While you are at it, check out my movie review of the documentary Behind The Curve and my reaction to ‘Tenant,’ Christopher Nolan’s upcoming film. Don’t forget to like, share, and subscribe for more posts like this one.