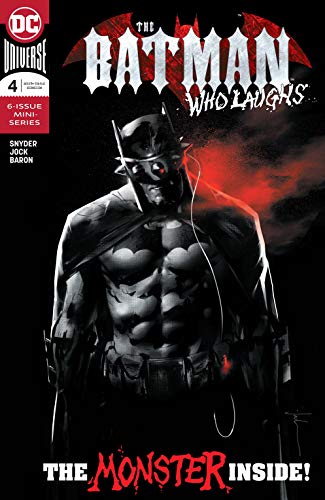 Billed on the cover as “The Monster Inside,” issue four of The Batman Who Laughs continues the story of Batman fighting the evilest version of himself, a Bruce Wayne who has become a strange amalgam of the Dark Knight and the Joker.

Continuing from issue three, Batman has become infected with the Joker Virus and instead of fighting it, he has decided to embrace it. Alfred tries to reason with him, but the Dark Knight has come to the conclusion that the Batman Who Laughs is only stoppable if Gotham City is seen through his eyes. Meanwhile, the Grim Knight disobeys the Batman Who Laughs and releases the captured Commissioner Gordon so he can settle a score from his dimension through a hunt.

Scott Snyder can really bring out the conflict within Batman. Similar to the “Court of Owls,” Bruce Wayne has to make decisions that are almost horrific in nature because the Batman Who Laughs is a truly horrific villain. He is one of the best things to come out of the “Dark Nights Metal.” Snyder, along with comic book artist Jock bring out the story of the fight for Gotham City as never before.

What do you think? Let me know in the comments below. Tell if there is a movie or graphic novel you would like to review. While you are at it, check out my movie review of the documentary Behind The Curve and my review of the graphic novel Daredevil And The Punisher: Child’s Play. Don’t forget to like, share, and subscribe for more posts like this one.