The Avengers have been assembling to fight crime, take on galactic overlords, battle time-displaced tyrants, defeat mutant terrorists, and stop other villains since 1963 when the team was brought together by Marvel Comics legends Stan Lee and Jack Kirby. Through the years, they have shifted membership quite substantially with some becoming unrecognizable, but they have always fought to save the Earth. Here is my list of the Top 10 Avengers Team Incarnations:

10. Heroes Reborn– While the comic series itself was not that good, the line-up was pretty epic. Youngblood, Captain America, Iron Man, Thor, the Vision, Hawkeye, Hellcat, Mantis, and a few others made-up this other group of heroes on Counter-Earth, a world made following the conclusion of the Onslaught saga.

09. The Originals– Iron Man, Thor, Ant-Man (Hank Pym), Wasp (Janet Van Dyne), and the Hulk come together to battle the villainous Loki after a distress call meant for the Fantastic Four makes its way to each of these heroes. Captain America would join later and receive “founding” status.

08. The Mighty Avengers– Part of the Initiative, Iron Man, Ms. Marvel, Wonder Man, The Wasp, Black Widow, Sentry, Ares, and Spider-Woman were created as a Fifty-State Initiative for New York.

07. The 90s– While there were a few spin-offs happening, the series focused on Black Knight, Sersi, Crystal, Hercules, the Vision, Black Widow, Black Panther, and smaller characters who were spotlighted in the main title series while Cap, Thor, and Iron Man would assist.

05. The Dark Avengers– After Tony Stark is relieved of command following the Secret Invasion, Norman Osbourne recreates SHIELD as HAMMER and gathers several villains and anti-heroes to pose as the Avengers. Norman becomes Iron Patriot, the alien Noh-Varr becomes Captain Marvel, Moonstone poses as Ms. Marvel, a venomized Mac Gargan is Spider-Man, Bullseye is Hawkeye, Dakken stands in for Wolverine, as well as Ares and Sentry.

03. The Avenging Spider-Man– In between working with the New Avengers, he would work with the main Avengers which consisted of Captain America, Red Hulk, Wolverine, Captain Marvel (Carol Danvers), Hawkeye, She-Hulk, Thor, and a few others.

02. MCU– The founders in the Marvel Cinematic Universe consisted of Captain America, Iron Man, Thor, Hulk, Black Widow, and Hawkeye work together to stop Loki’s invasion of New York on behalf of Thanos.

01. West Coast Avengers– With the Avengers spreading itself thin, Hawkeye and Vision create a team based in Los Angeles featuring Mockingbird, Wonder Man, Tigra, Jim Rhodes posing as Iron Man, with Firebird and the Thing joining later. This one would face tumultuous changes with Captain America, Black Knight, Scarlet Witch, Quicksilver, and so many others joining and quitting during the series run. Marvel Comics created a new version in 2019 that is awful. 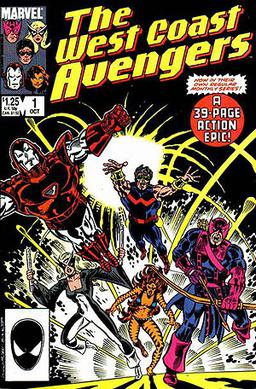 What do you think? Let me know in the comments below. Tell me if there is a comic book, movie, or novel you would like me to review. While you are at it, check out my remastered MCU tribute and my take on the Russo Brothers’ letter to fans. Don’t forget to like, share, and subscribe for more posts like this one.