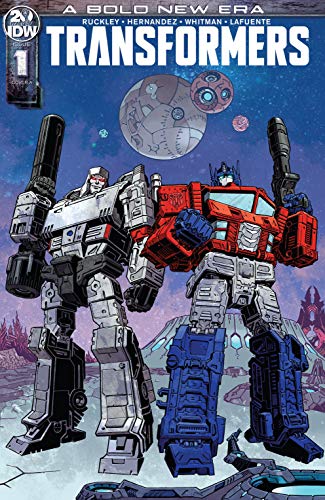 Written by Brian Ruckley with art by Angel Hernandez and Cachet Whitman, Transformers is being rebooted Generation 1-style by IDW Publishing.

Taking place before the Great War, Senator Orion Pax is trying to convince fellow Cybertron lawmaker Megatron from holding a rally as the leader of the ‘Ascenticons,’ a group of radicals. The former friends are now at odds as Megatron pushing for changes the Transformers are not ready to make. The Autobot Orion Pax is trying to alieve the pressure. Meanwhile, Bumble Bee and Windblade are taking the new recruit Rubble through the wilderness to meet Brainstorm.

The story is mostly dialogue, which normally, I do not care for, but Ruckley writes it incredibly well. It sets up the Generation 1 story-arc in a unique way instead of copying the Marvel Comics or the now defunct Dreamwave Comics plotlines. I will say, this new found craze over Windblade is puzzling. She is cool, I guess, but there are far more interesting female Autobots like Elita-One, Moonracer, Arcee, and others who could take up the spotlight.

One final note, I am not of the point in changing the Decepticons name. It does seem a little pointless, but maybe we will find in the future when Orion Pax takes the name Optimus Prime. While this new series did not kick off in the positive way Sonic The Hedgehog did, I do find it interesting and I hope to see more.

What do you think? Let me know in the comments below. Tell me if there is a comic book, movie, or novel you would like me to review. While you are at it, check out my thoughts on season two The Umbrella Academy and Young Justice: Outsider. Don’t forget to like, share, and subscribe for more posts like this one.