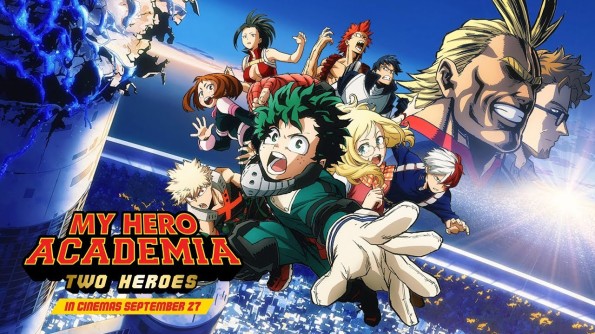 My Hero Academia: Two Heroes is a 2018 anime film directed by Kenji Nagasaki. It is set in-between the second and third seasons of the anime series. This review will cover the Funimation English dub.

As Melissa shows Midoriya around, they run into other students from U.A. High School who are also there for the expo. At a reception that evening, the UA students are late to the reception, but this turns out to be a blessing in disguise. A magnetic villain named Wolfram (Keith Silverstein) arrives and takes over the island security. He restrains all the heroes, including All-Might. Letting them know that if they try to escape, he will kill everyone on the island. As All-Might’s powers begin to fade, it is up to the U.A. students to stop the villains before it is too late.

My Hero Academia is one of my favorite anime series, so I was very excited to hear that they were doing a film. Unlike other features such as Dragon Ball Z: Resurrection F, Two Heroes is canonical to the television show, unusual for an anime. It was a welcomed change to the normal line-up.

Bones Studios and Toho Co put a lot of hype into this movie, so I had high expectations. I was not disappointed. This movie is incredible. They do their best in giving each of the main protagonists depth, so you do not need to see the series to understand them. Some of the side characters may seem odd to a new viewer, but it is not necessary to the plot.

The antagonist is truly frightening. His powers are strong and his motivations are horrifying. For those unfamiliar with the show, All-Might rarely meets a villain he cannot defeat, so creating a villain that would make you wonder if he could be defeated is difficult. This movie succeeded in spades.

I also want to praise the animation. It is incredible well-drawn from beginning to end. It compliments the tone and feel of the story-arc along with the voice acting. The entire cast does a fantastic job, especially Sabat as All-Might.

Bottom line, this is an amazing animated feature and a worthy adaption of the manga created by Kōhei Horikoshi. I only wish I had been at the Anime Expo in Tokyo.

FAVORITE QUOTE: What’s the matter? It looks like you finally stopped smiling!

What do you think? Let me know in the comments below. Tell me if there is a comic book, movie, or novel you would like me to review. While you are at it, read my list of Top 10 Batman: The Animated Series episodes and my review of the hit film Unplanned. Don’t forget to like, share, and subscribe for more posts like this one.