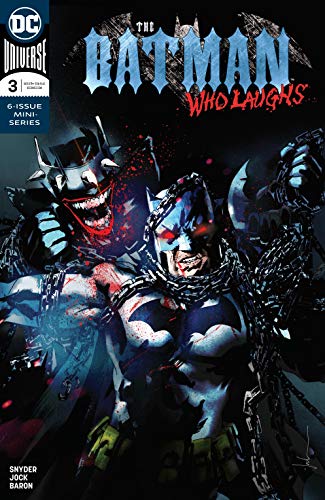 With the success of the “The Batman Who Laughs” one-shot during the DC Metals event, writer Scott Snyder with illustrators David Baron and Jock, bring us “The Batman Who Laughs,” a terrifying new miniseries. I have previously reviewed issue one and issue two, now check out my review of the third in this DC Comics comic book series.

As the Joker virus continues to infect Batman, the Grim Knight and the deadly Laughing Batman continue to terrorize Gotham and are planning to turn the city into a giant bomb. Commissioner Gordon and Batman turn to James “JJ” Gordon Jr., the Commissioner’s son and former serial killer. Batman wants to use his expertise as a psychopath to figure out the Laughing Batman’s next movie. However, JJ is only interested in making up for the past. This leads Batman to take drastic action.

This issue had way too much talking. While the previous issues had a lot of action and suspense, this one simply a ton of dialogue with some minor action in between the panels. This made it feel more like a filler story than an important part of the story-arc. Snyder has a bad habit of doing this, including when he was writing Batman for the New 52. Hopefully, it will return to form in the next issue.

What do you think? Let me know in the comments below. Tell me if there is a comic book, movie, or novel you would like me to review. While you are at it, read my movie review of The Last Laugh and my comic book review of “Batman: The Tyrant Wing.” Don’t forget to like, share, and subscribe for more posts like this one.