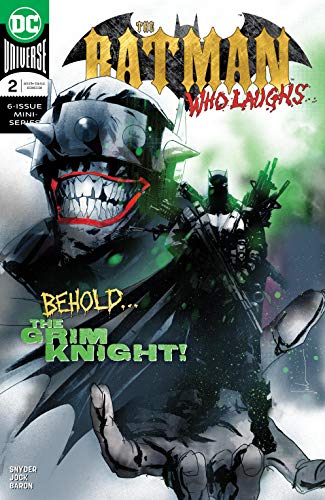 With the success of the “The Batman Who Laughs” one-shot during the DC Metals event, DC Comics brought the twisted version of the Dark Knight back for a miniseries that places him in the main DC Universe in order to fight Batman with the miniseries of the same name. In this review, I will discuss the second issue and where the series is going. (ICYMI: Here’s my review of the first issue).

After being infected by the Joker virus, Bruce Wayne is trying everything he can to prevent himself from turning into another Laughing Dark Knight. As he fights it off, the Laughing Batman and the Grim Knight are pulling other versions of Bruce Wayne from the Multiverse and draining them of their dimensional metal. For what purpose, Batman and Gordon will have to turn to an unlikely source to get information.

Writer Scott Snyder teams-up with illustrators David Baron and Jock for this series. They compliment each other and the tone of the series. Snyder is good at gradual story-tellings. This issue feels like the perfect progression to this series and it makes me excited for the continuation of this dark series.

What do you think? Let me know in the comments below. Tell me if there is a comic book, movie, or novel you would like me to review. While you are at it, read my movie review of The Last Laugh and my Pre-Oscars show with Samantha Sullivan on StudioJake. Don’t forget to like, share, and subscribe for more posts like this one.