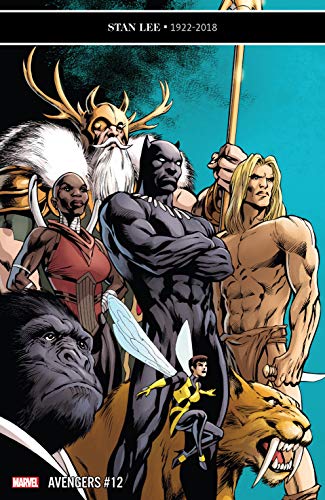 In this Marvel Comics series, T’Challa has been named chairman of the Avengers and he is seeking to recruit characters like Wasp, Ka-Zar, Gorilla-Man, Morbius the Living Vampire, and John James the Wolf-Man to help build their new headquarters in the arctic. They will serve as support staff for the Avengers.

This issue came out around the time Stan Lee passed away. There was a very lovely dedication to him at the beginning and the end of the comic book. I know that Stan “The Man” would have been proud it.

That being said, the story was kind of boring. It basically showed T’Challa and Okoye traveling around trying to recruit a support staff for the Avengers. While there were some cool additions like Wasp, Blade, and Dr. Nemesis, several obscure (and lame) characters like Gorilla-Man, Ka-Zar, and Morbius all had appearances that did not make much sense. It seems T’Challa aims to turn the Avengers into a new version of SHIELD since that organization is now gone. Also, Dr. Strange’s absence is a little bizarre. He seemed to be a main character and then he just vanished.

If they do hope to have rotating characters with the main cast, which includes Black Panther, Captain America, Thor, Iron Man, She-Hulk, Ghost Rider, and Captain Marvel, you would think the addition of some forgotten Avengers would be worth it. Stingray was teased in issue 9, but also Darkhawk, the Beast, Photon, or others. These random people make no sense.

What do you think? Let me know in the comments below. Tell me if there is a comic book, movie, or novel you would like me to review. While you are at it, read my Top 5 Captain America costumes and reviews of The Avengers issues 10-11. Don’t forget to like, share, and subscribe for more posts like this one.

One thought on “Comic Book Review- The Avengers Issue 12”