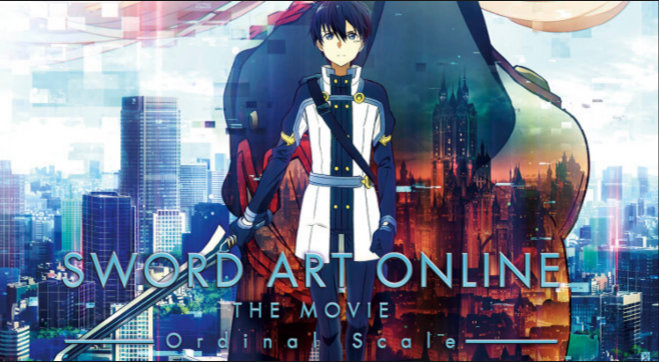 Sword Art Online The Movie: Ordinal Scale is a continuation of one of my favorite anime series of all time. A lot of the times, movies based on the anime seem to exist in their own story-arc, separate from the main plot (example Dragon Ball Z films), but in this case, the film is completely canon. It is directed by Tomohiko Itō and based on an original story by manga creator Reki Kawahara. This review covers the English dub.

Taking place after Sword Art Online II in 2026, a new company Augma has developed Ordinal Scale, a game that gets rid of the “full dive” virtual reality from SOA, Elfheim, and Gun Gale, choosing to create a holographic field that simulates reality.

Kirito (Bryce Papenbrook) is hesitant about the technology, though Asuna (Cherami Leigh), Lisbeth (Sarah Anne Williams), and Silica (Christine Marie Cabanos) enthusiastically join when Japanese pop singer Yuna (Ryan Bartley) begins making appearances at the battles to encourage players. However, Kirito, Asuna, and their friends begin to notice that game has similarities to SOA which begins to worry them. Their suspicions are confirmed when SOA survivors begin to lose their memories in battles with boss level creatures from Sword Art Online.

As the tournament continues, heading toward a free Yuna concert for Ordinal Scale players, Kirito decides to level up and find out who is stealing the memories of his fellow survivors while dodging attacks from the mysterious player Eiji (Chris Patton) who may have a strange connection to Asuna.

I loved this movie. I was able to see it in theaters and that made the experience even more fun. As fan of both ‘Sword Art Online‘ and ‘Sword Art Online II,’ I thought it was the perfect continuation of the animes. In fact, I believe it did a good job of rounding out the leftover mysteries from the first show.

One thing about SAO is it deals with is loss. The loss of identity, choice, loved ones, and even reality. These same themes were there, adding to the weight of the film that you feel all the way through.

Now, the one thing I did not like is the continual attempt to redeem Akihiko Kayaba, the man who created SAO and locked 10,000 characters in the game for many hundreds to die in attempts to escape. This guy is a mass murderer, but everyone seems okay to forgive him. This is the one point I do not like about this film or even in the show.

That being said, the action, the acting, and the animation are all incredibly well done. Nothing less was expected for this film and I do not think the filmmakers failed in any way, shape, or form.

Bottom line, Sword Art Online The Movie: Ordinal Scale is an excellent continuation and rounding out of the anime. If you are a fan, you will love it and if you are a newcomer it will definitely pull you in.

Watch the trailer below:

That is my review. What did you think? Let me know in the comments below and tell me if there’s a movie you’d like me to review. Check out my thoughts on the popular anime flick Spirited Away. Don’t forget to like, share, and subscribe for more posts like this one.