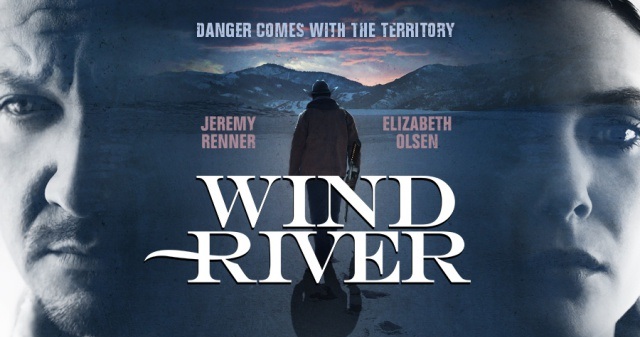 Wind River is a modern take on the Western genre. It is written and directed by Taylor Sheridan, known for his brief role in the hit FX series Sons of Anarchy. This is his second feature film to direct.

Winter has arrived at the Wind River Indian Reservation in Wyoming. While on the hunt for a group of mountain lions who have wandered close to the village, U.S. Fish and Wildlife Service agent Cory Lambert (Jeremy Renner) discovers Native American girl Natalie Hanson (Kelsey Chow) dead in the snow, dead from exposure.

The Tribal Police Chief Ben (Graham Greene) calls the FBI for help and they send Las Vegas-based Agent Jane Banner (Elizabeth Olsen) to help with the investigation. An autopsy confirms that Natalie was brutally raped before escaping into the snow, walking six miles to her death. Because her death was not caused by homicide, Agent Banner cannot call for back-up. She enlists the aid of Lambert to track Natalie’s boyfriend, a tough man named Matt (Jon Bernthal) who cannot seem to be found.

As a fan of both Western and murder mystery genres, I found this movie especially enthralling. Now, the plot was somewhat simple, but that made it straightforward and easy to follow. It avoided large, confusing twists and turns. Instead, it focuses on the protagonists and their desire to solve the mystery. My only problem was with the music. At times, I felt that it did not match the scenes, but this was not a major issue.

Sheridan does a great job of mixing the noir feel into the modern Western. You do not see much melding of those two genres, so it made for a compelling story that was unique in this way. It was a risky move, but it paid off on every level. From the grim feel of the film to the way the characters develop, you follow lock-step all of the way through to the climax.

I want to praise Olsen, Renner, and Greene. They were excellent in their roles and showed their true talent. They shined in all aspects of their characters, making them relatable and personable. This is something that lacks in a lot of modern films, but I felt that this movie definitely captured it.

Bottom line, Wind River is an excellent film that melds the Western and noir mystery genres with ease. The performances are excellent and Taylor Sheridan’s directing is top-notch.

What do you think? Let me know in the comments below. Tell me if there is a comic book, movie, or novel you would like me to review. While you are at it, check out my Top 10 Films I’m Looking Forward To In 2018. Don’t forget to like, share, and subscribe for more posts like this one.