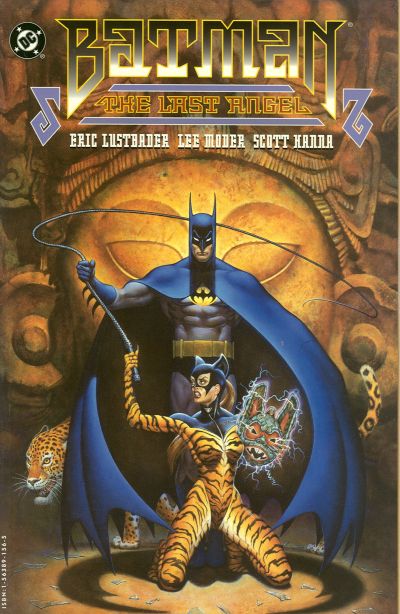 Archaeology Alan Darling arrives in Gotham City with the mask Balam, a bat-god in Mayan mythology who is said have brought down the South American people with his wrath. Darling is also friends with Selina Kyle aka Catwoman, who is mysteriously drawn to the mask, even adopting a tiger-themed costume and adopts a pet jaguar. Darling asks Batman to help him protect the mask as it appears gangster Rupert Thorne wants it for himself, after he hires a mercenary named Colt to get it. However, at the behest of a mysterious benefactor, Colt betrays Thorne and goes a crime spree to get the mask, forcing Batman to put it on causing the Dark Knight to become possessed by the spirit of Balam and begins spreading terror in Gotham. This forces Catwoman to act as the “hero” in order to save Batman from the power of the mask and Gotham City.

I want to shout out the artists: Lee Moder and Scott Hana. Their redesign of Catwoman’s costume into the tiger-theme was excellent and they nail the other character designs as well. Their work in this graphic novel is top-notch and shows their talent.

Many writers have tried to show what Batman would be like if he went truly dark, and The Borne Legacy author Eric Van Lustbader used the power of magic and mysticism to do this. It was a bold move and really made the story unique as Batman’s own free-will rarely gets overridden. I also liked the exploration of his relationship with Catwoman, showing that she can be a friend and foe. The story was unique and incredibly insightful into the mythology of Batman for someone who has not had a career in comic books.

What do you think? Let me know in the comments below. Tell me if there is a comic book, movie, or novel you would like me to review. While you are at it, check out my graphic novel reviews of Marvel’s Age of Ultron and Star Wars: Darth Vader. Don’t forget to like, share, and subscribe for more posts like this one.

One thought on “Graphic Novel Review- Batman: The Last Angel”