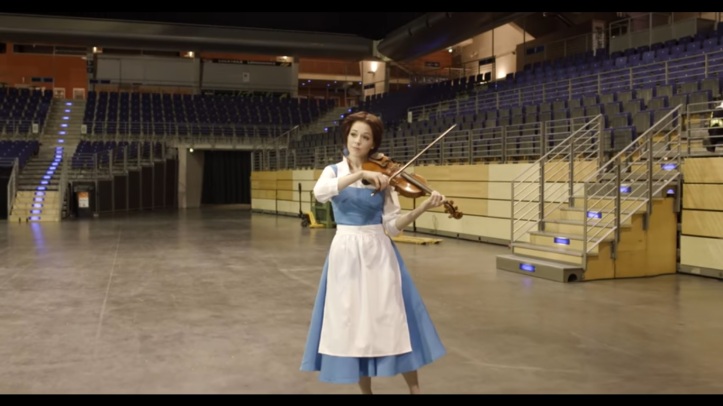 I am reviewing my first Lindsey Stirling song of the year. She returns to her roots with this cover of “Beauty and the Beast,” the title song for the Disney film. The music was composed by Alan Menken and with the lyrics written by Howard Ashman.

The song was meant to be “the height of simplicity” with how it was composed and animated for the film. Angela Lansbury sings it in the film as the Beast and Belle perform a dance scene. It is one of the defining moments of the movie, making it climax as a romantic work of cinema.

Dressed as Belle and backed by an orchestra, Stirling brings this Disney-inspired medley to life. This medley takes us back to Stirling’s roots as a movie medley musician on YouTube. She takes us through the songs of the classic animated with such hits including the Award-winning song A Tale As Old As Time. The music video takes through a day of set-up, rehearsal, lunch breaks, meeting fans, and of course, the conclusion is an epic concert.

It is always a welcomed sight to see musicians like Stirling showcase their fans in music videos. She definitely captures the spirit of the original and while it is not as good as the original, it was a good homage to it.

Check out the music video below:

What do you think? Let me know in the comments below. Tell me if there is a comic book, movie, or novel you would like me to review. While you are at it, check out Musical Urban Legends You Probably Believe Volume 2. Don’t forget to like, share, and subscribe for more posts like this one.