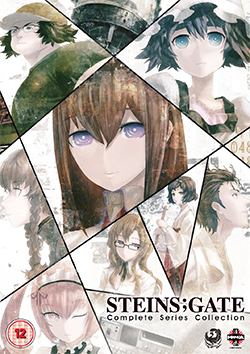 Steins;Gate is an anime directed by Hiroshi Hamasaki and Takuya Satō, and written by Jukki Hanada from the Japanese studio White Fox. It is based on the video game from Mages, Inc. Set in 2010, in Akihabara, Tokyo, Japan, it follows the eclectic members of the Future Gadget Laboratory and their misadventures. This review focuses on the English dub by Funimation.

Rintaro Okabe (J. Michael Tatum), a self-proclaimed mad scientist, runs the Future Gadget Laboratory where he researches time-travel and the time continuum, which he calls “Steins;Gate.” He works with Itaru “Daru” Hashida (Tyson Rinehart), a computer engineer/hacker, and his childhood friend Mayuri Shiina (Ashly Burch), whom he claims he is holding hostage. Okabe is fighting the mysterious “organization” called SERN which supposedly is hiding findings regarding time-travel. After witnessing the murder of scientist Kurisu Makise (Trina Nishimura), he texts Daru who had hooked up his phone to the machine they are testing. The next day, he finds Kurisu mysteriously alive.

After hassling her, he invites her to join the lab as his “assistant.” She soon meets his other friends and colleagues. Faris (Jad Saxton), a cosplay gaming champion who owns a restaurant. The frustrated landlord Yugo “Mr. Braun” Tennouji (Christopher Sabat). Luka (Lindsay Seidel), a shrine maiden, who is “totally a dude.” Moeka Kiryu (Jessica Cavanagh) a young woman with a nervous disorder who prefers to text. Suzuha Amane (Cherami Leigh) who works for the landlord, but does not like Kurisu. While examing their device, the lab members accidentally stumble on a way to send “D-Mails” to the past and start altering time. They start trying it out, but only Okabe seems to remember the previous timeline, calling this ability “reading Steiner.” However, as they continue to alter the past, a tragedy makes Okabe realize that altering time is too dangerous and he has to undo all of the changes he made.

I will say, this show had a somewhat slow start where they focused on introducing the characters, all of whom are very interesting and engaging, so once the plot kicked off it started getting very interesting. As each character is affected by the time change, you see the simple that they had on the lives around them.

What is most interesting about the show is the two main antagonists, Okabe and Kurisu, are not the most interesting characters. Faris and Mayuri are far more enduring as characters. Faris is the charming girl that plays along with Okabe’s delusions of grandeur. Mayuri is by far the best character and when her character encounters tragedy, it is felt with incredible impact. Ashly Burch does such an incredible job in the Engish dub as portraying the only person who seems to melt Okabe’s icy exterior. However, it is these twists and turns that bring in Okabe and his journey to set things right after he and the lab mess with “world lines” as online time-traveler John Titor calls the flow of time. Yes, the internet meme is a principal plot point of the show. At least for a time.

Now, with the plot as twisted as it is, it is actually quite a deep show. It is an excellent story that highlights the problem of messing with temporal mechanics, playing with time, and how altering the past affects everyone around them. While I would not rank it as a “favorite” anime, I think it is a moving story and incredibly imaginative.

That is my review. What did you think? Let me know in the comments below and tell me if there’s a movie you’d like me to review. Check out my thoughts on the anime action flick Dragon Ball Z: Resurrection F and Kite. Don’t forget to like, share, and subscribe for more posts like this one.