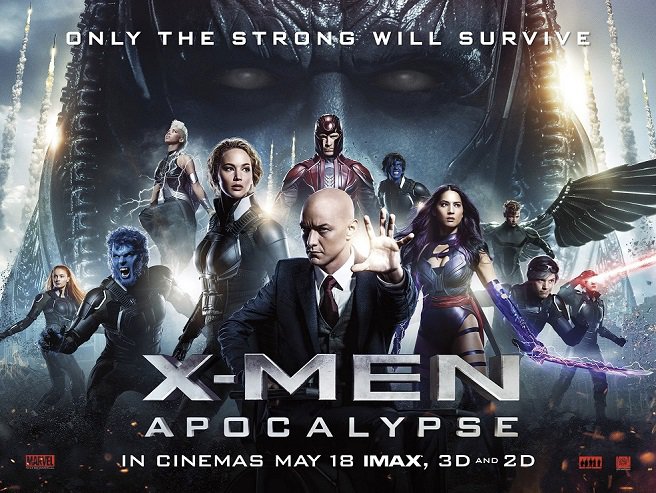 Directed by Bryan Singer, 20th Century Fox brings us the next Marvel movie X-Men: Apocalypse. It is the follow-up to X-Men: Days of Future Past, continuing on the new franchise. It stars an ensemble cast and while it delivers in some areas, it fails in others.

In the days of ancient Egypt, the first mutant, En Sabah Nur (Oscar Isaac), was born. Using alien technology, he can transfer from body to body allowing him to live forever. However, during one transition, he is sealed in a tomb following an attack by rebels who want to an end to his reign.

Years late in 1983, CIA Agent Moira MacTaggert (Rose Byrne) witnesses him being awakened by an accident. She tries to stop him, but he emerges as the Apocalypse. He then recruits Ororo Munroe (Alexandra Shipp), Psylocke (Olivia Munn), Warren Worthington III (Ben Hardy), and a mourning Magneto (Michael Fassbender), who had tried to move on since the incident in DC. However, after his new family’s death, he returns to his violent ways. Professor X (James McAvoy) is forced to contact her to understand what it is happening in the world

The movie was a cool film. Not as good as Captain America: Civil War or previous entries into the franchise, but definitely is a lot better than the critics are saying. It’s flaw is that the movie relies way too much on trying to bridge events from the first trilogy into this reboot series. At times, it got bogged down by that story and subplots, but I thought it managed to untangle itself to keep on with the story.

I will say, I did not like Apocalyse’s costume. It looked nothing like a spray-painted version of the comic book armor he would wear to terrorize the world. They could have put more effort in the design.

Bottom line, while it is not the best X-Men film, it is still enjoyable and fun. Of course, you can tell Bryan Singer is an atheist. He took not so subtle pot shots at religion in general and Christian specifically. However, it is not as in your face as other films.

FAVORITE QUOTE: We had a little help.

What do you think? Let me know in the comments below. Tell me if there is a comic book, movie, or novel you would like me to review. While you are at it, check out my movie review of X-Men First Class and my Top 25 Favorite X-Men. Don’t forget to like, share, and subscribe for more posts like this one.

This is article has been updated from a previous version.