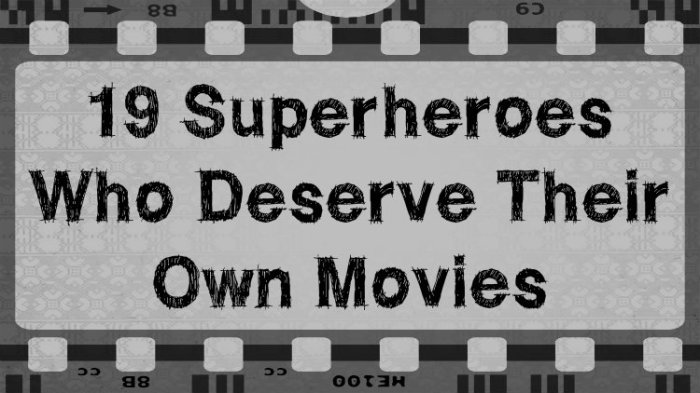 We’ve seen some incredible superhero films. The Amazing Spider-Man, The Dark Knight Rises, X-Men: Days of Future Past, Teenage Mutant Ninja Turtles just to name a few. There a few upcoming superhero films coming as well like Justice League, Dr. Strange, Wonder Woman, Black Panther, and many others. What about other great superheroes? There so many great directors could do a good job with some of these franchises. Here is my list of 19 Superheroes Who Deserve Their Own Movies:

Usagi Yojimbo- The tale of the anthropomorphic Samurai rabbit is one of several properties that would make an incredible film franchise. He appeared several times in the 2003 Teenage Mutant Ninja Turtles animated series. Dream director: Brad Bird of The Incredibles. Why? I can honestly only see Usagi as an animated film.

Sonic The Hedgehog- Yes, he deserves his own theatrical film. As long as they used the name Dr. Robotnik instead of Dr. Eggman, this fast talking super speedster would bring in a great return if done correctly. Dream director: Chris Williams, the co-director of Bolt. It could be a mixed film of CGI and live action.

New Gods- Orion, Bekka, and the rest of the population of New Genesis would make one of the greatest science fiction/fantasy superhero films of all time. If it had the right budget, it would be awesome. Dream director: James Cameron. He was planning on doing Spider-Man awhile back, but passed it over. This could be his entry into the superhero genre.

UltraForce- Since Marvel Comics bought out their parent company, the UltraForce has been hanging out in limbo. Their characters and the diversity of their powers would bring a great ensemble of characters and actors. Dream director: Gavin O’Connor director of Miracle. A team of competitive heroes that need to come together, who better?

Darkhawk- The tale of Christopher Powell who finds an alien amulet that gives him incredible powers is one for the ages. It would unite science fiction buffs with comic book fans. Dream director David Fincher, Alien 3 and Social Network. He could bring it all together with his credentials.

Blue Beetle- Jamie Reyes is the newest and coolest version of Blue Beetle. His powers, back story, time with the Titans would be any film makers dream. They could even have flashbacks to the original two beetles for fun. Dream director: Guillermo Del Toro director of Hellboy and Pacific Rim. He is good at making character driven films.

Spider Woman- Jessica Drew would have been perfect had Disney not acquired Spider-Man. Hopefully, Marvel will bring her into the MCU. She is one of the best characters and one of the best of the Avengers. Dream director: Karyn Kusama, Aeon Flux. She is a fantastic director who make this movie well.

Black Lightning- Jefferson Pierce is a great superhero and one of the few to turn down a role in the Justice League. He is one of the first black superheroes who deserves his own film franchise. Dream director: John Singleton, 2 Fast 2 Furious. He could really bring this character to life.

Nexus- Mike Baron and Steve Rude’s cosmic hero Horatio Hellpop is a defender of justice who really has no choice in the matter. He is a conflicted character and would make a great media franchise. Dream director: Robby Henson, House and Thr3e, this little known director has done underground films that have dark, twisted characters.

New Warriors- Okay, so they caused the original Marvel Civil War inadvertently, but this group of young heroes have a pretty cool roster of diverse heroes from all walks of life. They could make it an action comedy. Dream director: Brett Ratner. I know X-Men: The Last Stand was not up to par, but he could pull this adaption off.

Nightwing- Dick Grayson needs his own film away from Batman. He is a superhero in his own right and he should get his own spin-off. There are rumors of a Red Hood film, so why not give Grayson a shot without Batman. Dream director: Shane Black, director of Iron Man 3 and Predator. He is great at showing conflicted characters. Why not a vigilante trying to get out of his mentor’s shadow.

White Tiger- Ava Ayala is a superhero prodigy. Her grandfather and brother both at one time had the mantle of White Tiger. This would make a great generational comic book hero film. Dream director: Jon Turteltaub, National Treasure and The Sorcerer’s Apprentice. He is a great director that could fill in the blanks and tell a family story of superheroes.

Grendel- Granted, not a hero, but Matt Wagner’s comic book master criminal Hunter Rose has so many great facets it would make one awesome film series. You could continue on with the other people who take Grendel’s mantle after Hunter dies. Dream director: John Milius, Red Dawn and Conan The Barbarian. This blacklisted director could tell this story amazingly.

Hawkman- Carter Hall is one of the most fierce members of the Justice League. He hits first and asks questions later. This often leads to disagreements between him and Batman. Dream director: Mikael Håfström, Escape Plan and Vendetta. He is a known action director who could make this story take flight. Corny, I know.

Nova- The Sam Alexander version could be introduced into the Marvel Cinematic Universe. It would be great to introduce him in as a Guardian of the Galaxy universe or as a hero in his own right. Dream director: Alan Taylor, Thor Dark World and Terminator: Genesys. With his science fiction background, it would be a wondrous addition.

Green Arrow- There has been plans for a movie starring Oliver Queen, but plans were scrapped and he moved to TV. Maybe an origin story would be unnecessary, but it would be cool to see him on the big screen. Dream director: Justin Lin, The Fast and The Furious franchise. He’s responsible for transitioning the series into an action series as opposed to racing. He could make Green Arrow a great action movie.

Namor the Sub-Mariner- He is one of Marvel’s enigmas. He has worked for and against many teams like Avengers, Fantastic Four, and even the X-Men. Bill Everett’s masterpiece character and he deserves a movie in his own right.Christopher Nolan, Batman Begins and Inception. He is great with stories with complicated characters.

Black Canary- Dinah Lance was a founder of the original Justice League of America pre-crisis. In the New 52, she is the founder of the Birds of Prey and has an on again/off again relationship with Green Arrow. Danny Cannon TV’s Nikita pilot. He’s use to the action sequences that would be required to make this film.

Fantastic Four- You think I’m being mean and maybe I am a little bit. Marvel’s first family deserves a real movie, not one that is pasted together out of lost footage from other sci-fi films. Dream director: Joss Whedon, Avengers and Avengers: Age of Ultron. He is a master storyteller and he could really make the films great.

That is my list of superhero films I would like to see and as a bonus I included who I think could direct the films. What about you? Have any ideas or would like to suggest your own directors? Comment below and be sure to subscribe for more articles like this one.

One thought on “19 Superheroes Who Deserve Their Own Movies”