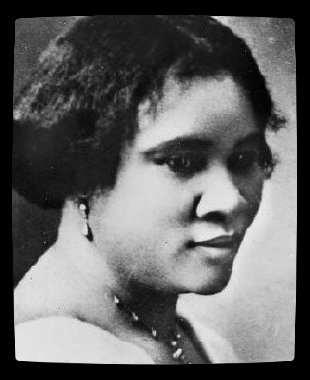 March is Women’s Appreciation Month, and today we have a true American heroine! Sarah Breedlove, later known as Madam C.J. Walker, was (by today’s standards) the first self-made female millionaire.

Sarah was born December 23, 1867 in Louisiana as the first free African-American in her family under the Emancipation Proclamation. She was orphaned at the age of seven and moved around a great deal to escape poverty and often to escape abusive relatives.

She was married twice before moving Denver, Colorado in 1905 where she met and married her third husband Charles J. Walker. It was here she got her nickname Madam CJ Walker. She learned about haircare and haircare products and later developed her own.

In 1904, she started to work as a salesmen for Annie Malone as a saleswoman. Ironically, Malone would become her biggest competitor.

In 1908, she and her husband relocated to Pittsburgh, where she opened her first beauty parlor. She and her daughter developed a “Walker System” for selling products. However, it was in 1910, when she moved to Indianapolis where it really took off.  Between 1911 and 1920, she expanded her business and developed a system to train women to become salesman. That was the height of her business.  She even did business internationally.

Aside from her business endeavors, she was an activist who encouraged former slaves and their children to pursue a good education. She also worked with the YMCA, gave money to many historically black colleges and advocated for civil rights. She eventually moved to New York City where she worked with Book T. Washington and Mary Bethune.

Madam CJ Walker passed away on May 25, 1919. She was a successful business woman, activist, and mother. She is proof that the American Dream is a reality.