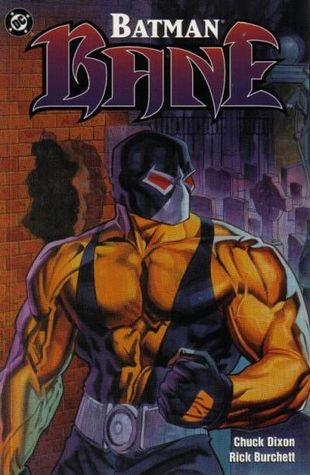 Written by comic book writer and artist Chuck Dixon, Batman: Bane is written by Dixon with art by Rick Burchett. The story acts as an epilogue to the DC Comics Batman: Legacy story-arc where Ra’s al Ghul promises his daughter Talia’s hand in marriage to Bane if he can conquer Gotham.

Waking up after his battle with Batman, Bane takes hostage a vessel carrying a nuclear reactor by intimidating the crew with his fighting skills. After gathering some members of the League of Assassins, he immediately heads to Bludhaven and from there Gotham City where he plans on getting revenge on Batman and restoring his reputation as a powerful enforcer.

Written in 1997, Dixon does an excellent job of crafting a story about Bane. Obviously, since he helped create the character, he knows how to make the villain incredibly intimidating, even to the Dark Knight. Since this is a one-off it did seem a little short, but it was an excellent story. Likewise, Burchett’s is top-notch. His character designs, backgrounds, and how he draws action is next level. It is a shame that comic books have started to drift toward trendier artwork instead of focusing on the artwork that gave these stories life in the beginning.

What do you think? Let me know in the comments below. Tell me if there is a comic book, movie, or novel you would like me to review. While you are at it, check out my graphic novel reviews of Damian, Son of Batman and Star Wars: Darth Vader Vol. 1. Don’t forget to like, share, and subscribe for more posts like this one.