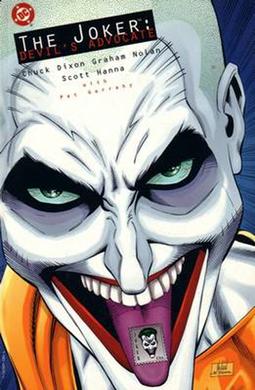 DC Comics brings us the one-shot story ‘The Joker: Devil’s Advocate,’ written by Chuck Dixon with art from Graham Nolan and Scott Hanna. It was first published in 1996.

After the Post Office announces a new series for the “greatest comedians,” The Joker arrives to poison the stamps but ends up taking the Postmaster General hostage. He is apprehended by Batman and Robin before being thrown in jail. A hot-shot Gotham City DA works with Commissioner Gordon, Harvey Bullock, and Renee Montoya to try him as a criminal and the insanity plea that the villain’s lawyer is trying to use. However, after more people are poisoned by the toxic stamps after Joker’s arrest, Batman begins to doubt that the Joker is behind the scheme. Despite the discouragement from his allies, Batman starts to investigate knowing full well he could get Joker off.

Graham Nolan and Scott Hanna are excellent with the artwork. Their illustrations for the Joker and Batman are top-notch, not to mention the cityscape of Gotham. I also enjoyed how they did the courtroom drama as the Joker spins his story of crime and villainy. They display the emotions of fear, hatred, anger, and satisfaction with such prestige.

This story presents a moral conundrum that you do not see a lot in comic books. Does Batman solve the crime of the killer stamps, knowing it gets the Joker off, or does he follow through with justice? As he explains to Tim Drake, “Sometimes justice works both ways.” Chuck Dixon is the only one who could pull this kind of story and he does it so well. He truly understands the characters and how Gotham City works. It is a stunning story and one that should be remembered.

What do you think? Let me know in the comments below. Tell me if there is a comic book, movie, or novel you would like me to review. While you are at it, check out my reviews of the comic books Ultimate Iron Man and Gates of Gotham. Don’t forget to like, share, and subscribe for more posts like this one.

One thought on “Comic Book Review- The Joker: Devil’s Advocate”