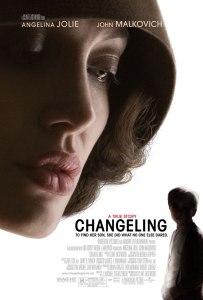 Clint Eastwood directed Changeling, a masterpiece of a biopic released in 2008. It tells the true story of Christine Collins whose boy went missing and whose disappearance may be connected to the Wineville Chicken Coop Murders.

Taking place in 1928, Christine Collins (Angelina Jolie ) is a loving mother who takes care of her son Walter (Gattlin Griffith). He vanishes one night and though she reports it, the Los Angeles police department ignores her. However, a radio preacher named Reverend Gustav Briegleb (John Malkovich) rails against the LAPD for their corruption and negligence. After taking his disappearance seriously, Chief James E. Davis (Colm Feore) and Captain J. J. Jones (Jeffrey Donovan) returns a boy to Mrs. Collins. It is a boy, but not her Walter. When she tries to confront the police about the false identity, they at first ignore her. Later, they imprison her on false pretenses in an insane asylum.

Clint Eastwood is a master storyteller. It is riveting from beginning to end. It exposes how corrupt the system was back in the day. The production value is incredible and the way it moves is truly in sync with the emotions the scenes invoke. He definitely did an amazing job of bringing this story to light.

As for the performances, Jolie, Malkovich, and Donovan are all at the top of their game. Jolie keeps you mesmerized with her portrayal of Collins. You are stunned by what happens to her as she goes through life. Malkovich is a force of nature when it comes to portraying Gustav, but Donovan as the corrupt LAPD Captain truly captured the character.

Besides the movie’s plot, Eastwood does a good job with the themes. He weaves a tale of how power can corrupt and how it hurts the weak. Not to mention how when you become ungovernable, you can fight back against that corrupting power. In this case, all it took was the love of a mother to expose the corruption and the horror of powerful people. With all this in mind, I had to admit, I was surprised this movie did not make a bigger stir when it was released. It is so compelling.

Bottom line, The Changeling is a moving true story about a mother who is searching for a son in the midst of a corrupt system that is holding her back.

FAVORITE QUOTE: I just stayed away.

What do you think? Let me know in the comments below. Tell me if there is a comic book, movie, or novel you would like me to review. While you are at it, check out my movie reviews of Dragon Ball Z: Resurrection F and Iron Man 2. Don’t forget to like, share, and subscribe for more posts like this one.

Consider picking up a copy of my paranormal and supernatural thriller Cacophony! It is now available on Amazon.