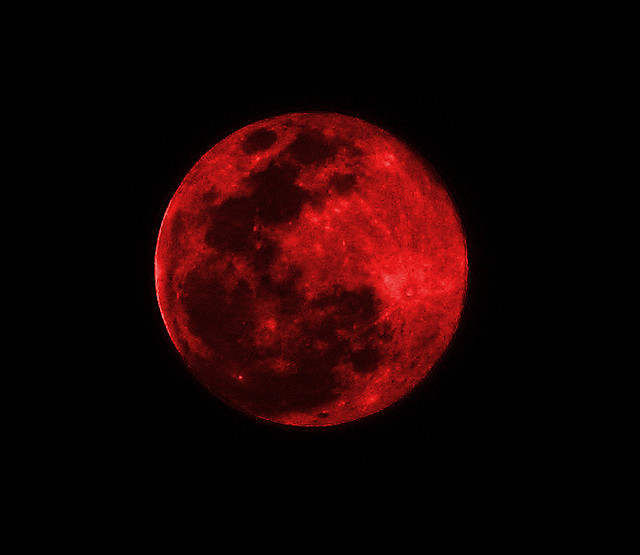 Because of the hype around a particular book turned documentary film, many Christians believe that the upcoming blood moon is a sign that the End Times are starting at the least and that the world will end at the most. The blood moon tetrad is suppose to be a warning of the Coming Day of the Lord, or Jesus Christ’s second Coming The theory revolves around the blood moons and Jewish holidays, followed by historical events where supposed blood moon seasons took place. It relies heavily on 3 scriptures:

I will display wonders
in the heavens and on the earth:
blood, fire, and columns of smoke.
31 The sun will be turned to darkness
and the moon to blood*
before the great and awe-inspiring Day of the Lord comes.
32 Then everyone who calls
on the name of Yahweh will be saved,
for there will be an escape
for those on Mount Zion and in Jerusalem,
as the Lord promised,
among the survivors the Lord calls.

However, in the grander scheme of Daniel, Revelations, the prophesies of Jesus, and even the lunar cycle, this theory does not add up. We should use discernment in connecting the dots of the End Times prophecies that are mentioned in the Bible, not just a passage or two from the Book of Joel.

Let’s take a look at that scripture. For one thing, what is a blood moon? It is an eclipse when the Earth blocks the light from the sun to the moon, causing the light to bend differently than usual, making it appear orange or, often, red. It definitely gives the impression that the moon is covered in blood, however, there is a slight flaw. The scriptures in Joel make it clear that the sun will be turned to darkness. That is an impossibility during a blood moon because the light from the sun bouncing off the Earth is what makes it appear red. The sun does not even look dark during the eclipse, it looks totally normal. Even if the sun went dark at the same time of the eclipse, the moon would look like a black spot in the sky without supernatural intervention.

As for the mysterious connection to the dates mentioned, such a blood moon happening during a “tetrad” with Passover and Sukkot and events in history, once again, they do not add up. In the blood moon cycle of 1493-1494, this points to when the Jews were expelled from Spain, however, if you really look at history, they were expelled in 1492. Somehow, the warning came after the event. Same with 1949-1950 cycle when Israel was made a nation, once again it was after the event. If this is suppose to be a warning, why did it happen after? That makes no sense. It is not evil, just wrong.

When we look at End Times Theology, Christians are suppose to have good discernment, but it seems like we take the bait every time a preacher thinks he solves the Eschatology code. The Rapture was suppose to happen in 1988, 1989, 2000, 2005, 2006, 2010, 2012 (why were Christians using a Mayan calendar anyway?) The faces and dates will always be there.

I am not saying that I have all the answers, but I am saying that no one does. The End Times will always be a mystery and quite frankly, it is better that way. No one will ever figure it out completely, so let us just live with the anticipation that Jesus is coming back for us.

Of course, I could be wrong as well. If I am, then my next post will not appear.