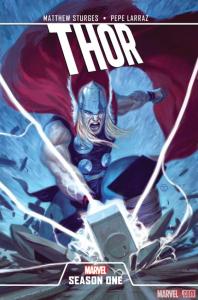 Thor Season One is written by Matthew Sturges with artwork by Pepe Larraz. It is the newest in a series of graphic novels that retells and modernizes the origins of our favorite Avengers.

Thor is offered the kingdom of Asgard and given his mighty hammer at a young age. However, after rushing into the den of Frost Giants to save his mischievous brother Loki, Thor finds it was all a ruse. Odin in his wrath banishes Thor to Earth and transforms him into the human Donald Blake, an identity created by the Fates.

As Donald Blake, he is a surgeon. He decides to help fellow surgeon Jane Foster found a free clinic in New York City. After going to Europe to sell some property, he encounters a mysterious cane that changes him back into Thor. Meanwhile, Loki works to build an empire after discovering he is really the son of the fallen Frost Giant king.

Loki then works to usurp Odin and become the true leader of Asgard, but Lady Syf and the Warriors Three stand in his way. He starts to dispatch them and they set off to try to find Thor knowing his mighty hammer can save Asgard.

I enjoyed this graphic novel a great deal. However, while it included characters like the Fates and Fire Giants, it completely omits Balder the Brave and even Frigga, Queen of Asgard. They are virtually nonexistent. Other than that, I enjoyed this retelling of the Prince of Thunder’s origin very much.

Head over to YouTube to subscribe to my channel where you can watch my vlog and my free web show StudioJake. As a bonus, check out last week’s episode where I discuss the indie film The Arroyo.

If you would like to order your paperback copy of my debut novel Cacophony: A Tale Of Faith And Fear, click here. If you want to download it for your iPad or tablet click here. The Kindle edition is now on sale! It is an incredible paranormal thriller about a group of demons trying to steal human souls by assaulting their church. The Messenger Gabriel, a Guardian angel Christopher, and the Seven Archangels are sent by God to stop them. It’s a tale that mixes drama, supernatural fiction, with a dash of fantasy.

Consider supporting me and my creative efforts on Patreon. It is because of your generosity that writers, bloggers, and vloggers like me can continue to be creative.