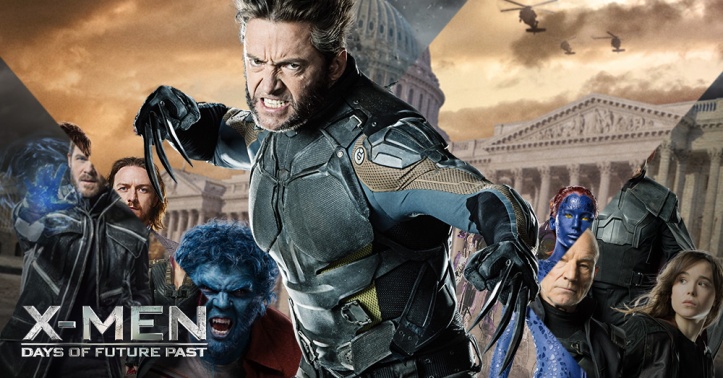 I wanted to see X-Men: Days Of Future Past in theaters, but do to unseen circumstances, I had to wait for it to come out on DVD. Thus, I got to see both the “Rogue Cut” and the theatrical version.

In the near future, robotic beings known as Sentinels have taken over the planet. Professor X (Patrick Stewart) and Magneto (Ian McKellen) are leading Wolverine (Hugh Jackman), Shadowcat (Ellen Page), Storm (Halle Berry), Iceman (Shawn Ashmore), and a few others in a resistance. Shadowcat learns the ability to phase people into the past, helping the X-Men avoid capture. They make an abitious plan to send Wolverine to the past in 1973 in order to gather past Prof. X (James McAvoy) and Erik (Michael Fassbender) in order to stop Boliver Trask (Peter Dinklage) from using Mystique’s (Jennifer Lawrence) DNA to develop the Sentinels.

We see our favorite characters from the original series and from X-Men First Class, like Lucas Till as Havok and both Kelsey Grammer and Nicholas Hoult as Beast, but what brings them together? A very complicated time travel plot, but it is very well-crafted and well planned out.

From the action to the dialogue and even down to the Easter eggs are very well-timed and crafted. Hugh Jackman is epic as the lead and he brillantly brings both the reboot franchise and the original together while making X-Men: The Last Stand nothing, but a bad dream.

One final note, the “Rogue Cut” features Anna Paquin as Rogue in the future helping the X-Men survive. It feels in some minor, but obvious gaps from the theatrical version. While I would not say it was better, it did help supply some missing info.

Bottom line: This is a fantastic entry into the franchise and really helps to set it back on track after the disaster of X-Men: The Last Stand and the confusing reboot in X-Men: First Class. Definitely check it out.

FAVORITE QUOTE: The future: a dark, desolate world. A world of war, suffering, loss on both sides. Mutants, and the humans who dared to help them, fighting an enemy we cannot defeat. Are we destined down this path, destined to destroy ourselves like so many species before us? Or can we evolve fast enough to change ourselves… change our fate? Is the future truly set?

That is my review. What did you think? Let me know in the comments below and tell me if there’s a movie you’d like me to review. Check out my thoughts on X-Men Origins: Wolverine. Don’t forget to like, share, and subscribe for more posts like this one.