Classic Film Review- A Face In The Crowd 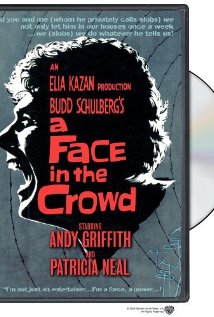 After being raised on The Andy Griffith Show and seeing the titular actor in Matlock, I had gotten use to seeing the late Andy Griffith in roles that were fatherly and wise. However, I stumbled upon this gem and found Griffith also made a great antagonist.

A Face In The Crowd is a black and white movie directed by Elia Kazan (of A Streetcar Named Desire fame). It stars Andy Griffith as a traveling drifter named Larry “Lonesome” Rhodes, a musical talent that is discovered by a radio producer named Marcia Jefferies, played by Patricia Neal.

After his local appeal peaks, Rhodes is picked up by a big-time Memphis agency and becomes a spokesman for an energy pill that is billed to give men a boost. He begins an affair with Marcia and continues to rise in fame, leading him to New York City and even into politics. As his power rises, his massive ego and fame begins to cloud him, leading him to hurt everyone around him. He begins using his fame as a battering ram to push for his agenda and even begins branching into politics.

This film is one of the best I have seen from the black and white era. The story, the acting, the directing, the cast, and even the one-liners are delivered in an impeccable manner.

As I watched it, I could tell it was an indictment on fame. It can be a lesson for even modern celebrities who rise so fast and then burn out. As a fan, I have seen it happen so many times even today.

It can be a lesson to not only potential stars, but also to viewers who start to idealize stars and stardom.  While not to popular at the time, I believe it will be remembered for years to come as it shows the incredible talent of Andy Griffith.

FAVORITE QUOTE: All the way down.

Watch the trailer below:

Head over to my YouTube channel to subscribe to my channel where you can watch my vlog and free web show StudioJake.  Check out this vlog where I review the DC Comics special The Casting.